Pelosi, a Ripped Speech, and the Records Debate 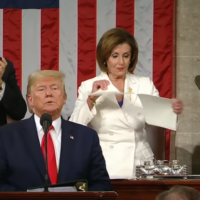 Facts of the Union 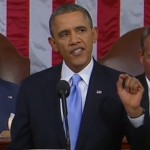 President Obama exaggerates the potential benefits of his ambitious plan for universal preschool, as he first outlined in the State of the Union and repeated elsewhere since then: Obama says every dollar invested in “high quality” preschool can return “seven dollars later on” but that is based on an economic analysis of a small, two-year program that targeted disadvantaged youth …

President Obama put a rosy spin on several accomplishments of his administration in his 2013 State of the Union address. The president claimed that “both parties have worked together to reduce the deficit by more than $2.5 trillion.” But that’s only an estimate of deficit reduction through fiscal year 2022, and it would be lower …

The State of Obama’s Facts

Summary
The president’s State of the Union address got the facts right — mostly.

Obama said “the Taliban’s momentum has been broken” in Afghanistan. But targeted assassinations continue, and at least one independent foreign policy expert says the enemy may just be waiting until the U.S. leaves.
The president said a get-tough tariff on tire imports from China has saved more than 1,000 U.S. jobs. But tire industry officials say Chinese imports have simply been replaced by imports from other countries.

We fact-checked President Obama’s State of the Union address, but what about the Republican response speeches? We found two new claims that we haven’t covered before: In the official response …

We found no outright false factual claims in Obama’s State of the Union address, but we did note some that were arguable, and some promises that may prove unrealistic. He called his Race to the Top initiative “the most meaningful reform of our public schools in …

More State of the Union

A section of our story "Obama’s State of the Union Address" was inadvertently dropped when we posted the article Thursday. It shows that Obama spoke a little too sweepingly when he claimed that lobbyists have been cut out of policymaking jobs in his administration. We’ve added the section to the piece, and we include it below:

Obama’s State of the Union Address

President Obama peppered his State of the Union address to Congress and the nation with facts, which were mostly right but sometimes cherry-picked, strained or otherwise misleading. He said “there are about 2 million Americans working right now” because of last year’s stimulus bill. But his own economic advisers say …

Summary
Bush pretty much stuck to the facts in his final State of the Union address. But he chose his facts carefully and didn't always tell the whole story.

He correctly noted that the number of jobs has grown steadily for a record 52 straight months. But the number of jobs gained is a fraction of the gains made during Bill Clinton's years, and wage gains have been eaten up by inflation.
He claimed his proposal to give tax deductions for those who buy their own health insurance will "put private coverage within reach for millions."