President Barack Obama messed up one of his favorite talking points about his 2012 budget proposal at a small business forum in Cleveland.

The president claimed that “I’ve designed a budget that freezes spending for five years and will help reduce the deficit by $400 billion over the next decade to the lowest level since Dwight Eisenhower was president.” That’s not even close to being true.

According to the fiscal year 2012 budget unveiled on Feb. 14, the deficit in 2021 would be $774 billion (page 171). That actually would be a nearly $900 billion reduction — not a $400 billion cut — from the $1.65 trillion deficit projected for this year. But even if that turns out to be true, that wouldn’t be the lowest deficit since Eisenhower.

The president corrected himself later in the forum, saying: “I’ve put forth a budget that includes a five-year spending freeze that will help reduce the deficit by $400 billion and will get annual domestic spending down to the lowest levels since Dwight Eisenhower.” That’s the claim he has been making repeatedly since he proposed the budget earlier this month. But even that is suspect.

That statement, too, means something different than it appears on its face. The White House says that the president is actually referring to “non-security discretionary spending,” which is only part of “annual domestic spending.” And the president is measuring it as a percentage of GDP, not in plain dollars.

The White House put out a graphic that illustrates the president’s claim about non-security spending. It shows that in 2015, based on the president’s budget, spending is projected to be 2.1 percent of GDP — the lowest level since it was 2.2 percent under President Eisenhower. 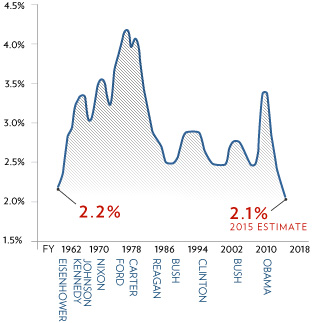 A spokeswoman for the Office of Management and Budget said that the corresponding table for the graphic hasn’t been made public yet. And confirming the figures behind the graphic is difficult.

OMB does have a table for “non-defense discretionary spending” going back to 1962. That table projects that spending in 2015 would be 2.9 percent of GDP, which would be lower than it was in 1962 at 3.4 percent of GDP. But spending under President Clinton was just 3.2 percent of GDP in 1999. So, by that measure, Obama’s 2015 projection would actually be the lowest since then, not since Eisenhower.

Brian Riedl of the conservative Heritage Foundation said the president was using budgeting gimmicks to lower projected spending. “[T]he president found an ingenious way to reduce projected discretionary spending: just reclassify highway spending and a portion of Pell Grants as entitlement spending,” Riedl wrote for National Review Online. “By the president’s logic, we could slash entitlement spending immediately simply by deciding to no longer count Medicare as an entitlement.” He also argued that projected spending in 2015, was just that — a projection. “Since discretionary spending is written from scratch annually, all figures beyond 2012 are just placeholders,” he said.

In addition, the Congressional Research Service has raised concerns about comparing non-security discretionary spending during different administrations, as we’ve mentioned before. CRS said in a 2010 report that “no standard method of dividing security spending from non-security spending has been universally accepted. … In particular, the G.W. Bush and Obama Administration definitions vary in significant ways.”

So, the president’s claim at the beginning of the forum was wrong. And his correction near the end of the forum is at least questionable.