President Barack Obama released the long-form version of his birth certificate today, yet another piece of concrete evidence that shows he was born in the United States. The White House said he received a special exemption from the Hawaii Department of Health, which keeps the long-form documents confidential. 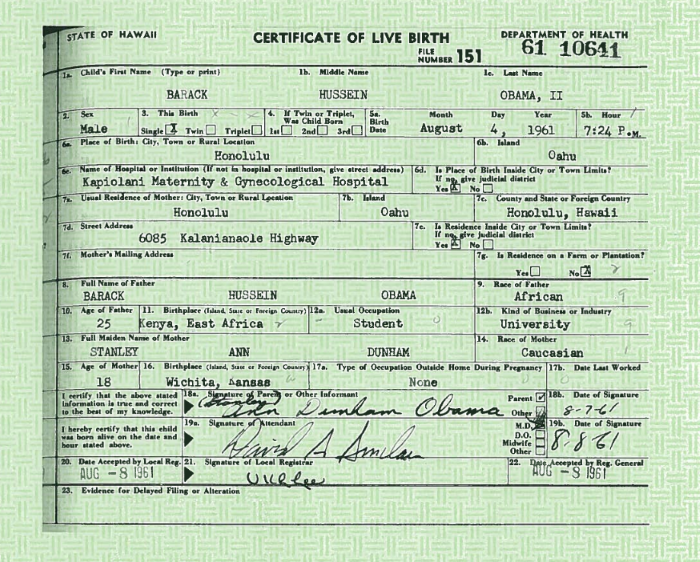 The pdf version of the document can be seen here.

In remarks to the press today, Obama said that his campaign had already released his birth certificate in 2008. And, in fact, FactCheck.org staffers handled, examined and photographed the “certification of live birth.” That short-form document is what Hawaii releases to citizens who request a copy of their birth certificate, and we confirmed that it meets legal requirements for proving citizenship and obtaining a passport. We concluded: “Obama was born in the U.S.A. just as he has always said.”

If that wasn’t enough, Hawaii newspapers had run birth announcements in August 1961, shortly after Obama’s birth.

The long-form version that the president released today has a few additional details, beyond what the short-form includes. It says he was born at Kapi’olani Maternity and Gynecological Hospital, just as the president has said. And it lists his mother’s birthplace as Wichita, Kansas, and his father’s as Kenya, East Africa. The certificate is also signed by Obama’s mother and an attending physician.

On April 25, state Director of Health Loretta J. Fuddy wrote to Obama, saying that she was “making an exception to current departmental policy” and issuing copies of the original Certificate of Live Birth.

Obama said he sought release of the long-form birth certificate so that the nation could focus on more serious matters. “We do not have time for this kind of silliness,” he said.

We certainly have debunked a fair share of silliness on this issue.

But Obama also said he’s sure that no matter what evidence he produced, for some segment of society “this issue will not be put to rest.” Tell us about it, Mr. President.