Q: Does the herbicide glyphosate cause cancer?

A: There is evidence to suggest it may cause cancer at very high doses, but not at the low doses typically found in foods.

A FoodBabe.com article says glyphosate has been found in prepared foods. Vani Hari (FoodBabe) cites a couple of studies about the effects of glyphosate on animals. Are these studies legit? I was just wondering what your organization’s take on this is. Also the organization in France has declared that glyphosate is carcinogenic. Any help understanding this issue would be great.

Many of our readers have asked us to sort out the facts about whether glyphosate, the most used herbicide in the world by volume in 2015, causes cancer.

Our readers often cited an article on FoodBabe.com, which outlines a report that found “alarming levels” of glyphosate in various brands of cereal, cookies, chips and crackers. This article has spread through Facebook, with users sharing it roughly 2 million times.

In her post, Vani Hari of FoodBabe.com claims the report, commissioned by the environmental groups Food Democracy Now! and the Detox Project, shows “millions of people [are] being poisoned by” glyphosate.

Hari also says that “[i]ndependent research links glyphosate to cancer … and it has been deemed a probable human carcinogen by the World Health Organization,” which are claims the report itself also makes.

Hari isn’t wrong about findings by researchers at WHO. She also isn’t wrong that glyphosate has been found in foods. But she doesn’t tell the whole story.

Some experts say that at very high doses glyphosate can cause cancer, but at low doses, typically found in foods, the herbicide is unlikely to cause the disease.

In March 2015, the International Agency for Research on Cancer, the cancer agency of WHO located in Lyon, France, did classify glyphosate as “probably carcinogenic to humans.”

But in May 2016, a group of pesticide residue experts at WHO and the United Nations also concluded that glyphosate is “unlikely to pose a carcinogenic risk to humans” through their diets. These researchers noted that there’s conflicting evidence on whether glyphosate leads to non-Hodgkin lymphoma, a cancer of the lymph nodes, in workers who handled the herbicide. They also pointed out that the “overall weight of evidence indicates” glyphosate isn’t genotoxic in mammals at doses and routes “relevant to human dietary exposure.”

An FAQ page on WHO’s website clarifies why the IARC’s and the pesticide residue experts’ conclusions aren’t contradictory.

The 2015 IARC conclusion aimed to identify any potential cancer hazard glyphosate may pose to humans at some level of exposure, WHO explains. But in 2016, the pesticide residue experts at WHO and the U.N. assessed the actual cancer risk the herbicide poses to consumers at a specific level of exposure, namely the level commonly found in foods.

“The same chemical can have different effects at different doses, which depends on how much of the chemical a person is exposed to,” WHO adds. “It can also depend on the route by which the exposure occurs, e.g. ingestion, inhalation or injection.”

In fact, a yet-to-be-published study that found no link between glyphosate and non-Hodgkin lymphoma, may have changed IARC’s 2015 analysis of the herbicide had it been published.

Aaron Blair, an emeritus scientist at the U.S. National Cancer Institute, who contributed to the unpublished study and led IARC’s review of glyphosate, said the study “would have made it less likely that glyphosate would meet the agency’s criteria for being classed as ‘probably carcinogenic,’” reported Reuters in June 2017.

However, IARC declined to comment on whether the unpublished study might have changed the agency’s analysis in an email to Reuters.

The research came from the Agricultural Health Study, a primarily National Institutes of Health-run project that looks at cancer prevalence and other health issues in over 89,000 farmers and their spouses in Iowa and North Carolina.

Other agencies also have weighed in on the potential glyphosate-cancer link.

The European Chemicals Agency, for example, concluded in March 2017 that “the available scientific evidence did not meet the criteria to classify glyphosate as a carcinogen.” This assessment, like IARC’s, looked for any potential cancer hazard glyphosate may pose to humans at any dose, not the actual cancer risk it poses at a specific dose.

The U.S. Environmental Protection Agency has yet to complete a final assessment about glyphosate, however.

How Much Is Too Much?

Different agencies use slightly different measures to assess how much glyphosate a person can be exposed to without incurring health risks. The U.N./WHO and the European Food Safety Authority assessments both use an “acceptable daily intake” measure, while the EPA uses a “chronic reference dose.”

The EPA defines “chronic reference dose” as a level of exposure over an extended period of time, usually a lifetime, that causes a low likelihood of risk, while an “acceptable daily intake” aims to measure the level of extended exposure that results in no risk.

In 2002, the EPA said glyphosate’s chronic reference dose shouldn’t exceed 1.75 milligrams per kilogram of body weight per day. However, it’s important to point out that the agency didn’t set this amount specifically for cancer, but health effects in general.

This brings us to how much glyphosate the report highlighted by FoodBabe.com found in common brands of cereal, cookies and crackers.

The report says the cereal Cheerios had the highest level of glyphosate out of any product at as much as 1,125.3 parts per billion. That translates to about 0.032 mg per 28 gram serving of the cereal.

It’s important to mention that the report says Cheerios had levels of glyphosate “as high as” 1,125.3 ppb, which means that other samples (though how many, the report doesn’t say) of the cereal had lower quantities.

It’s also important to point out that individuals can be exposed to glyphosate through other sources as well, such as drinking water.

According to WHO, food and water are the “main routes of exposure” to glyphosate for the general population (as in, not pesticide applicators). But WHO adds that “the major source of exposure to glyphosate is expected to be food” because of the way the chemical interacts in solids and liquids.

So yes, glyphosate is found in some foods, but experts believe these doses of the herbicide don’t pose a cancer risk to humans.

What About the Studies Food Babe Cites?

Our reader also asked us if the studies that Hari, or Food Babe, cites in her article are “legit.” They are legit, but they don’t specifically concern glyphosate exposure through food.

The first source Hari cites is a 1994, and thus outdated, assessment of glyphosate by the International Programme on Chemical Safety, of which WHO is part.

Hari also points to a 2014 review of the scientific literature published in the International Journal of Environmental Research and Public Health. These researchers did find evidence to suggest that glyphosate exposure at some workplaces is associated with one form of cancer, B cell lymphoma.

A third study Hari cites, published in the journal Cancer in 1999, found that occupational exposure to glyphosate and other herbicides “yielded increased risks” for non-Hodgkin lymphoma. But the authors of that study add that “definite conclusions cannot be drawn for” glyphosate because their sample was too small.

Another study Hari cites, published in Environmental Health Perspectives in 2005, used data gathered from the NIH’s Agricultural Health Study, which at the time involved 57,311 licensed pesticide applicators in Iowa and North Carolina.

The researchers concluded: “Glyphosate exposure was not associated with cancer incidence overall or with most of the cancer subtypes we studied,” including non-Hodgkin lymphoma. But they did find that exposure to glyphosate was associated with a “more than 2-fold increased risk of multiple myeloma,” a form of bone cancer. However, the association was based on “a small number of cases,” they wrote.

One last source Hari cites is a 2003 study on rats published in the journal Toxicology Letters that looks at the teratogenic, not the carcinogenic, potential of Roundup, not just glyphosate alone. When a substance is teratogenic, it causes developmental issues, not cancer. Monsanto’s Roundup is one of many glyphosate-based herbicides currently on the market.

The researchers did find that Roundup had teratogenic potential. But they gave rats much more of the herbicide than a member of the general public would consume through food — between 500 and 1,000 mg of Roundup over a nine-day period.

Other Chemicals in Roundup?

But that’s still not the end of the story.

Glyphosate is considered the active chemical in many herbicides, such as Monsanto’s Roundup, but it’s not the only chemical. Though research is sparse, there’s evidence to suggest these other chemicals may make glyphosate more toxic than it is on its own.

It’s hard for independent researchers to study the health and environmental effects of these other chemicals because most manufacturers of glyphosate-based herbicides consider their formulations proprietary, or trade secrets, explains Michael T. Meyer, a geochemist at the U.S. Geological Survey, and others in an December 2013 paper published in the Journal of Chromatography A.

But researchers have looked at one chemical — polyoxyethylene tallow amine, or POEA — which is surfactant in many glyphosate formulations. POEA increases the glyphosate’s ability to penetrate plant leaves, thereby making the herbicide more effective. It’s also used in a number of other products, such as cleaners and degreasers.

Meyer and his group point out in their paper that “studies have shown POEA to be harmful to a variety of aquatic wildlife.” Despite this evidence, the EPA calls POEA an “inert ingredient” in glyphosate-based formulations, the researchers add.

Unfortunately, that question remains unanswered. And Monsanto, which manufactures Roundup, has admitted as much. A law firm involved in a suit against Monsanto released emails in which Monsanto executives discussed the topic, reported the New York Times on Aug. 1.

In 2002, William F. Heydens, the product safety assessment strategy lead at Monsanto, also wrote in an email to Farmer: “[W]hat I’ve been hearing from you is that … Glyphosate is OK but the formulated product (and thus the surfactant) does the damage.”

In response to the release of emails, Scott Partridge, vice president of global strategy for Monsanto, told the Times: “What you’re seeing are some cherry-picked things that can be made to look bad,” adding, “[b]ut the substance and the science are not affected by this.”

Still, multiple studies do suggest that glyphosate-based formulations can be more toxic than glyphosate alone. However, these studies are not definitive evidence that the formulations cause cancer in humans. More research still needs to be done.

Food Democracy Now! and The Detox Project. “Glyphosate: Unsafe on Any Plate.” Report. 2016.

FAO and WHO. Joint FAO/WHO Meeting on Pesticide Residues. 16 May 2016.

ECHA. “Glyphosate not classified as a carcinogen by ECHA.” Press Release. 15 Mar 2017.

Benachour, N. et al. “Time- and Dose-Dependent Effects of Roundup on Human Embryonic and Placental Cells.” Archives of Environmental Contamination and Toxicology. 4 May 2007.

Bolognesi, Claudia et al. “Genotoxic Activity of Glyphosate and Its Technical Formulation Roundup.” Journal of Agricultural and Food Chemistry. 19 May 1997.

Tsui, Martin T.K. and Chu, L.M. “Aquatic toxicity of glyphosate-based formulations: comparison between different organisms and the effects of environmental factors.” Chemosphere. 7 May 2003.

Folmar, L.C. et al. “Toxicity of the herbicide glyphosate and several of its formulations to fish and aquatic invertebrates.” Archives of Environmental Contamination and Toxicology. May 1979. 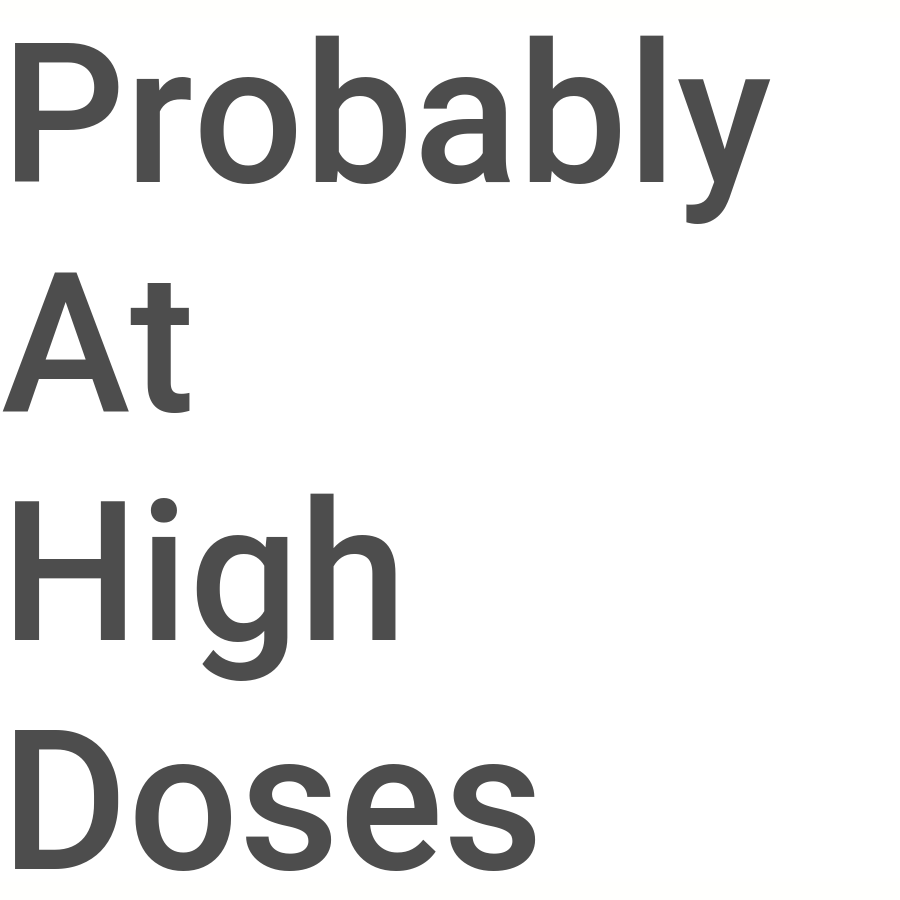 Probably At High Doses
https://foodbabe.com/2016/11/15/monsanto/
Does the herbicide glyphosate cause cancer?
Ask FactCheck
–