Sen. Bernie Sanders wrongly said President Donald Trump has never apologized for his comments on the “Access Hollywood” tape in which he bragged about sexually inappropriate behavior.

Trump did apologize at the time for his comments in a press release, a video statement and during a presidential debate. Some have questioned the sincerity or quality of the apology, but he did apologize.

Sanders’ comment came during an interview on NBC’s “Meet the Press” on Dec. 10 after he responded to questions about the resignation of Democratic Sen. Al Franken amid allegations of sexual misconduct.

“The point is that we have the absurdity now of a president of the United States who basically says on a tape that everybody in this country has seen, his pride in a sense in assaulting women, and he has not apologized for that, and he has, you know, not offered his resignation,” Sanders said. “So I think that’s the absurdity.”

Sanders is, of course, referring to the “Access Hollywood” tape released a month before the election that caught Trump on a hot microphone in 2005 bragging about forcing himself on women. “When you’re a star, they let you do it,” Trump said at the time. “Grab ’em by the p***y. You can do anything.”

Despite Sanders’ comment on “Meet the Press,” though, Trump did issue a rare apology for his comments on the tape. Trump’s campaign initially released a public response from Trump which stated, “This was locker room banter, a private conversation that took place many years ago. Bill Clinton has said far worse to me on the golf course — not even close. I apologize if anyone was offended.”

The following day, Trump issued a longer video response in which he said, “I said it, I was wrong, and I apologize.”

Trump, Oct. 8, 2016: I’ve never said I’m a perfect person, nor pretended to be someone that I’m not. I’ve said and done things I regret, and the words released today on this more than a decade-old video are one of them. Anyone who knows me, know these words don’t reflect who I am. I said it, I was wrong, and I apologize. … I’ve said some foolish things, but there is a big difference between the words and actions of other people. Bill Clinton has actually abused women and Hillary has bullied, attacked, shamed and intimidated his victims. We will discuss this more in the coming days. See you at the debate on Sunday.”

The issue was raised at the second presidential debate two days later. And Trump again described his words as “locker room talk” but he again said the words, “I apologize.”

Trump repeatedly changed the conversation to the need to defeat ISIS. But debate moderator Anderson Cooper of CNN asked Trump whether he had ever actually kissed or groped women without their consent — as he had said on the tape — and Trump responded, “No, I have not.”

Trump later apologized in the debate again for his words on the tape, even as he tried to draw a distinction between his words and the actions of Bill and Hillary Clinton.

Trump, Oct. 10, 2016: That was locker room talk. I’m not proud of it. I am a person who has great respect for people, for my family, for the people of this country and certainly I am not proud of it, but that was something that happened. If you look at Bill Clinton, far worse. Mine are words and his was action. His words, what he has done to women. There’s never been anybody in the history of politics in this nation that has been so abusive to women. So you can say any way you want to say it, but Bill Clinton is abusive to women. Hillary Clinton attacked those same women, and attacked them viciously, four of them here tonight. One of the women, who is a wonderful woman at 12 years old was raped. At 12. Her client, she represented, got him off and she is seen laughing on two occasions laughing at the girl who was raped. Kathy Shelton, that young woman, is here with us tonight. So don’t tell me about words. I am, absolutely, I apologize for those words, but it is things that people say, but what President Clinton did, he was impeached, he lost his license to practice law, he had to pay an $850,000 fine to one of the women. Paula Jones who is also here tonight. And I will tell you that when Hillary brings up a point like that and she talks about words that I said 11 years ago, I think it’s disgraceful and I think she should be ashamed of herself, if you want to know the truth.

As we wrote at the time, Trump distorted the facts when he accused Hillary Clinton of “laughing at” a rape victim. And, we should note, numerous women have come forward to accuse Trump of sexually inappropriate behavior. The Washington Post Fact Checker has a running list of the more than a dozen women who have publicly claimed that Trump “physically touched them inappropriately in some way.”

We reached out to Sanders’ Senate office and asked if Trump hadn’t apologized for the remarks on the tape.

“If you consider the video he recorded accusing Bill Clinton of abusing women and Hillary of bullying victims an apology,” Josh Miller-Lewis, a spokesman for Sanders told us via email. “Two days after that supposed apology he said at the debate that he was proud of what he said on the tape. He also now reportedly calls the ‘Access Hollywood’ tape ‘fake news.'”

In the debate, Trump said he was “not proud” of his comments on the tape, contrary to what Miller-Lewis told us.

The New York Times on Nov. 28 reported that Trump has privately challenged the authenticity of the tape, and whether it was his voice on it. But Trump has not publicly done so.

In a press briefing on Nov. 27, White House Press Secretary Sarah Huckabee Sanders said Trump’s position on the tape had not changed since his initial statements owning up to the comments.

Reporter, Nov. 27: Does the president still accept the authenticity of the “Access Hollywood” tape that he apologized for during the campaign?

Sanders: Look, the president addressed this. This was litigated and certainly answered during the election by the overwhelming support for the president and the fact that he’s sitting here in the Oval Office today. He’s made his position on that clear at that time, as have the American people and his support of him.

Reporter: So he apologized for it, which would seem to acknowledge its authenticity. And that position hasn’t changed?

Sanders: No. Like I just said, the president hasn’t changed his position. I think if anything that the president questions it’s the media’s reporting on that accuracy.

Again, some people don’t like the way Trump apologized. They question his sincerity and his quickness to pivot to the misdeeds of the Clintons. We can’t speak to that. We can only say that Trump said the words “I apologize” — a rare event for Trump — and expressed regret and embarrassment for his words on the video.

False
President Donald Trump has never apologized for his comments on the “Access Hollywood” tape in which he bragged about sexually inappropriate behavior.
Bernie Sanders
U.S. Senator
https://www.sanders.senate.gov/ 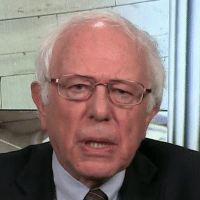