At a meeting on international trade, President Donald Trump falsely claimed his policies have reduced the cost of electricity for U.S. businesses.

In fact, electricity costs have increased in Trump’s first 10 months in office.

The president made his boast during a meeting on trade that he held at the White House with his cabinet and some members of Congress.

Trump, Feb. 13: Because of what we’ve done, our energy prices are going so low, our electric costs are going so low, that other countries aren’t going to be able to compete with us. We’re really doing a great job of bringing them down. And a lot of that had to do with the tax cuts, but it has to do with lots of other things, too.

That’s inaccurate. The average monthly retail price of electricity for the industrial sector — which would include manufacturers — was 6.58 cents per kilowatt hour (kWh) in January 2017, when Trump took office. As of November, it was 6.79 cents per kWh – an increase of a little more than 3 percent, according to the most recent data from the Energy Information Administration.

At no point in Trump’s first full 10 months did the cost of electricity drop below the January 2017 price. The average during the 10-month period was 6.95 cents and the median — the midway point — was 6.88 cents. 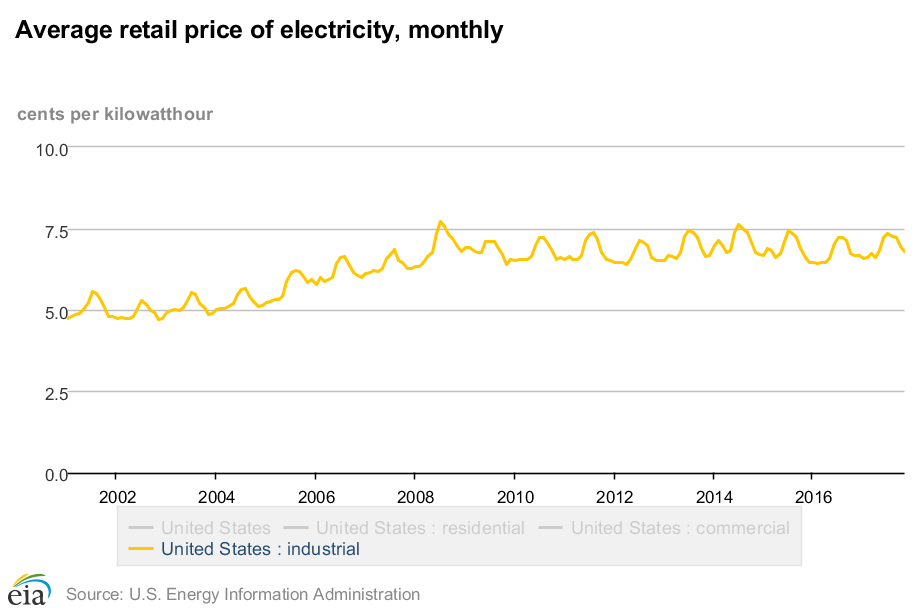 The president also credited tax cuts for “bringing down” electricity prices, but Trump did not sign the tax cut legislation until Dec. 22. The EIA says that December data will not be available until later this month. However, the agency projects that the retail price for industrial users will increase in December to 6.84 cents per kWh.

A key factor in the price of electricity is the cost of the fuel that is used to generate power. For example, in the first six months of 2016, there was a decline in average residential electricity prices for the first time since 2002. At the time, the EIA attributed the price drop to declining natural gas costs as electric plants increasingly moved away from coal in favor of natural gas.

False
Claimed his policies have reduced the cost of electricity for U.S. businesses.
Donald Trump
President of the United States
https://www.whitehouse.gov/administration/president-trump