President Donald Trump claimed the U.S. has “large trade deficits with Mexico and Canada,” which isn’t accurate. The U.S. actually runs a small trade surplus with Canada, and the deficit with Mexico isn’t all that large, relatively speaking.

He made the misleading claim in an early-morning tweet on March 5, threatening to put stiff new tariffs on Mexican and Canadian steel unless a “new and fair” North American Free Trade agreement is signed.

We have large trade deficits with Mexico and Canada. NAFTA, which is under renegotiation right now, has been a bad deal for U.S.A. Massive relocation of companies & jobs. Tariffs on Steel and Aluminum will only come off if new & fair NAFTA agreement is signed. Also, Canada must..

The U.S. still buys more in goods from Canada that it sends there, but it more than makes up for that deficit with an even bigger surplus in sales of services — chiefly travel, transportation and intellectual property (such as movies and software). The president has a tendency to focus just on goods and ignore services when talking about trade deficits, as we have noted before.

As for Mexico, the U.S. did have a total trade deficit with its southern neighbor of nearly $70 billion last year, but that’s relatively modest.

It is dwarfed by the $337 billion trade gap with China, for example. And it amounts to just 11 percent of total two-way U.S. trade with Mexico, which is our third largest trading partner after China and Canada. By contrast, the deficit with China amounts to 47 percent of the total trade between the two countries. 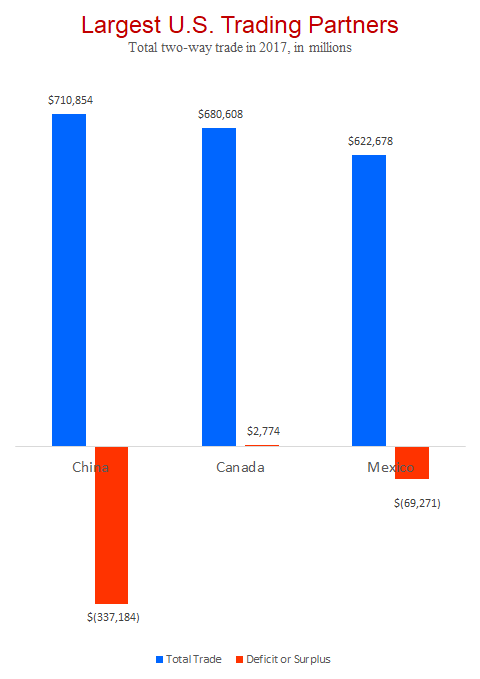 Update, March 15: Canada reported that it had had a $26.8 billion surplus in goods and services with the U.S. in 2017. That would be about $19.8 billion in U.S. dollars based on the 2017 annual exchange rate of $1.350 Canadian dollar to $1 U.S. dollar. The Census Bureau says such a discrepancy over trade data is common. One factor, we were told, is re-exports — which are products that Canada ships to the U.S. that originate in another country. Canada would know the origin of the product, but the U.S. may not — so re-exports are booked differently by each country. Whether the U.S. has a $2.8 billion surplus or a $19.8 billion deficit with Canada, the trade imbalance is relatively small, contrary to Trump’s claim, considering the total amount of trade between the two countries.