Alexandria Ocasio-Cortez, the Democratic nominee for New York’s 14th Congressional District, wrongly claimed that the low U.S. unemployment rate was “because everyone has two jobs.” The number of people holding more than one job has no bearing on the unemployment rate.

Nor is the rate of people holding multiple jobs rising. In fact, the rate of employed people who hold multiple jobs was 4.9 percent in June, slightly lower than the 5.1 rate when unemployment peaked at 10 percent during the Great Recession.

With her upset victory over Rep. Joe Crowley, Ocasio-Cortez was the only Democrat this year to beat an incumbent House member. In an interview with PBS on July 13, Ocasio-Cortez, an avowed democratic socialist, was discussing the viability of capitalism in America when she was asked about the current strong economy and low unemployment rate of 4 percent. (It starts at the 5:32 mark.)

“I think the numbers that you just talked about is part of the problem, right?” Ocasio-Cortez said. “Because we look at these figures and we say, ‘Oh, unemployment is low, everything is fine, right?’ Well, unemployment is low because everyone has two jobs.”

We reached out to Ocasio-Cortez’s campaign, but we did not get a response. Chodorow-Reich, who served as an economist on the White House Council of Economic Advisers during the Obama administration, told us via email it is possible to interpret Ocasio-Cortez’s comment in a more favorable light.

“For example,” he said, “if she meant ‘The unemployment rate is low but that doesn’t mean the economy is at its potential because many people don’t have a solid job and instead are forced to work two jobs to make ends meet’, you could find economists willing to agree or disagree with the statement.”

That may be so, but the rate of multiple jobholders has remained relatively flat in recent years, even as the raw number of people holding multiple jobs has inched up, and as the number of overall workers also has increased. According to the Bureau of Labor Statistics, the multiple jobholders rate as a percentage of those employed stood at 4.9 percent in June 2018, which is near the lowest it has been since 1994.

The rate of 4.9 percent is also slightly lower than the 5.1 percent rate in October 2009, when the unemployment rate reached a Great Recession peak of 10 percent. As the unemployment rate has steadily declined since the recession, the rate of multiple jobholders has remained fairly steady, near 5 percent — which is where it was when President Donald Trump took office.

The lowest rate since 1994 was 4.7 percent, reached in a handful of months between 2013 and 2017. Today’s rate of 4.9 percent is near that low. The rate hit an all-time high of 6.5 percent in November 1996. Here’s a graph from the Bureau of Labor Statistics showing the multiple jobholders as a percentage of employed people going back to 1994: 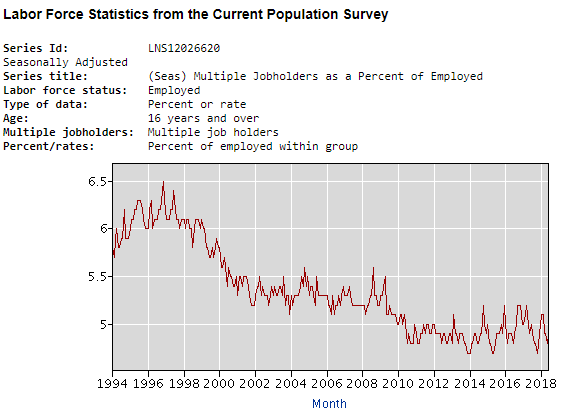 Furthermore, looking at the data in terms of raw numbers clarifies that the number of multiple jobholders is not skyrocketing. In June 2018, there were 7,619,000 such individuals. That’s nearly a million more than at some points in 2010. But it’s about the same number of people who held multiple jobs before the recession. And as we said, the rate remained fairly constant throughout that period.

One could argue the rate of people working two jobs should be lower if the economy is so strong. But it’s inaccurate to say “unemployment is low because everyone has two jobs.”