In the days after Christine Blasey Ford came forward to describe an alleged sexual assault by Supreme Court nominee Brett Kavanaugh when they were teenagers, a series of falsehoods about the woman circulated online, questioning her credibility and motives.

Ford, a California professor, identified herself publicly and told her story in an interview published in the Washington Post Sept. 16. Her claim focuses on an encounter at a Maryland house party in the early 1980s, in which she says a drunk Kavanaugh pinned her to a bed and attempted to remove her swimsuit, covering her mouth when she tried to scream. When a friend of his jumped on the two, she reportedly said, she was able to escape the room.

Kavanaugh has denied Ford’s allegation “categorically and unequivocally,” telling lawmakers in a letter that such claims against him “are smears, pure and simple.”

“Such grotesque and obvious character assassination — if allowed to succeed — will dissuade competent and good people of all political persuasions from service,” he wrote.

Ford and Kavanaugh are expected to testify before the Senate Judiciary Committee on Thursday, Sept. 27. In advance of that, we outline some of the viral deceptions that we’ve debunked.

Widespread stories published on multiple websites claimed that Kavanaugh’s mother, who was also a judge, had foreclosed on the home of Ford’s parents. Some stories used words like “revenge” and “sinister connection” in describing what was billed as a supposed motive by Ford.

But Martha Kavanaugh didn’t foreclose on the property. Instead, she was the judge on the case, initially filed in 1996, who approved the bank’s motion to dismiss the matter after the Blaseys refinanced. Maryland records show the family still owns the home.

For more, see “False Claims About Kavanaugh’s Mom and Foreclosure.” 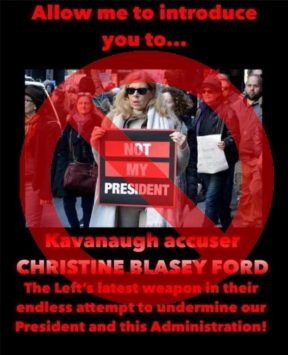 A meme shared across social media platforms argued that Ford was the “Left’s latest weapon” against President Donald Trump. But the photo employed to illustrate that assertion  — of a woman at a New York City rally carrying a “not my president” sign — is available on stock image websites. There is no evidence to support the claim that the woman in the photo is Ford.

It’s true that Ford is a registered Democrat and that a friend of hers told the Mercury News, of San Jose, California, that Ford attended a local Women’s March in 2017 and later a March for Science. But there is no evidence she was at the New York rally.

For more on this claim, see “Meme Misidentifies Stock Image as Kavanaugh Accuser.”

A rumor that began with a tweet by a pro-Trump Twitter user purported that Ford had also made earlier allegations of sexual misconduct against Trump’s first Supreme Court pick, Neil Gorsuch. But there is no information that supports the claim — which was given attention by dubious websites and popular conservative figures, including the radio host Rush Limbaugh.

For more about this falsehood, see “Baseless Claim Tells of Gorsuch Accusation.” 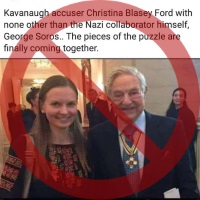 Another photo that made the rounds on social media purported to link Ford to a major Democratic campaign donor, George Soros. But the photo actually showed Soros with a Polish human rights activist named Lyudmyla Kozlovska, not with Ford.

Although Soros has a history of supporting Democratic causes, Ford testified to the Senate Committee on the Judiciary that she is “fiercely independent” and was not motivated by politics to come forward.

For more about this photo, see “Viral Photo Doesn’t Show Soros with Ford.”

Ford’s story is far from the first high-profile news story to prompt a rash of fabricated developments — major stories often do. In the aftermath of the high school shooting in Parkland, Florida, for example, we debunked a number of falsehoods about the tragedy and its survivors.

Updated, Sept. 28: This story has been updated to include the story about the viral image of Soros that makes the false claim that he is shown with Ford.