President Donald Trump on several occasions has taken credit for making Medicare “stronger.” In one instance, he said, “Medicare will be $700 billion stronger over the next decade thanks to our growth.”

In fact, Medicare’s finances have worsened since he took office, and economic growth is not expected to help the program as much as he claims:

Trump made claims about strengthening Medicare — the health insurance program for senior citizens and the disabled — several times over the course of three days in early September.

In remarks at the White House on Sept. 5, Trump boasted that “we have done more as an administration than any other administration in already less than two years,” including on health care. “We’re saving Medicare,” he said.

A day later, while campaigning in Montana for Republican Senate candidate Matt Rosendale, Trump said, “Matt Rosendale is going to make sure we’re not touching your Social Security and your Medicare is only going one way. That’s stronger.”

On Sept. 7, the president made the specific claim about the impact of economic growth on Medicare. His remarks came at a fundraiser for GOP Rep. Kristi Noem, who is running for governor of South Dakota against Democrat Billie Sutton. The winner will replace outgoing Republican Gov. Dennis Daugaard.

Trump, Sept. 7: Medicare will be $700 billion stronger over the next decade thanks to our growth. And I will tell you that Billie Sutton, and people like Billie Sutton, Democrats with a very strong liberal leaning, they’re going to destroy your Medicare and they’re going to destroy your Social Security. I’m leaving your social — it’s going to be left alone, your Social Security will be left alone. We’re not touching your Social [Security], we’re just going to make it stronger. We’re going to make the country stronger. We pay for things through growth. The way we’re growing right now will be able to pay for things that nobody thought possible. Remember during debates they’d say, “How are you going to do it?” I said, “We’re going to do it through growth.”

Medicare and budget experts we contacted said Medicare’s financial outlook has worsened and economic growth is not expected to provide much help.

“If anything, some of the administration’s actions appear to be working in the opposite direction, at least as measured by the status of the Medicare Part A trust fund,” Juliette Cubanski, associate director of the Kaiser Family Foundation’s Program on Medicare Policy, told us in an email.

Cubanski is referring to the Medicare trustees’ most recent annual report, which provides an updated projection on the financial status of the Hospital Insurance, or HI, trust fund.

Medicare is made up of four parts: Part A (payments to hospitals), Part B (payments to physicians), Part C (Medicare Advantage, or private insurance options) and Part D (prescription drug coverage). Those parts are funded by two funds: the Hospital Insurance (HI) trust fund, which is funded primarily by a payroll tax paid by workers and their employers, and the Supplementary Medical Insurance (SMI) trust fund, which is funded primarily through general revenue and beneficiary premiums.

The Medicare Part A trust fund is designed to be self-supporting, but the trustee report warns that the financial outlook for the fund “has deteriorated as compared to the projections in last year’s annual report.”

The HI fund spent more on hospital payments than it received in income from 2008 through 2015, the report said. Although the fund had a slight surplus in 2016 and 2017 and a balance of about $200 billion prior to 2017, the trustees say deficit spending will return this year and accelerate in the coming decade, exhausting the fund earlier than expected.

“The estimated depletion date for the HI trust fund is 2026, 3 years earlier than in last year’s report,” the report said. At that point, Medicare would be able to pay only 91 percent of hospital expenses, as the table on page 29 shows. (The SMI trust fund, because of how it is structured, cannot be depleted.)

The trustees, in part, cited the tax cut law as a reason the HI fund is expected to run out of money more rapidly than previously expected.

The Tax Cuts and Jobs Act of 2017 that Trump signed in December repealed the so-called individual mandate in the Affordable Care Act, which requires people to have health insurance or pay a penalty. The repeal, which is effective in 2019, is expected to increase the number of uninsured Americans and that, in turn, will increase Medicare Disproportionate Share payments made to hospitals that serve large populations of low-income people without insurance.

Also, about 8 percent of HI trust fund revenues come from a federal income tax on Social Security benefits. But the tax cut law reduced the federal income tax rates, meaning a portion of Social Security benefits will be taxed at a lower rate and generate less income for Medicare, as explained in a July report by the Congressional Research Service on Medicare’s finances.

“A stronger economy is definitely one of the factors that could help to shore up the status of the Medicare Part A trust fund, since the majority of funding for that comes from payroll taxes,” Cubanski, of the Kaiser Family Foundation, said. “But all of the factors that affect Medicare financing would have to be going in a positive direction, whereas the administration has taken other steps that have actually made Medicare’s funding situation worse.”

As we said, Medicare Part A is just one part of the program for seniors and the disabled. In total, Medicare cost $710 billion in 2017 and about 41 percent of that was paid through general revenues (see Table II.B1). Total Medicare expenditures will more than double to about $1.44 trillion by 2027, as illustrated by the CRS chart below, and the share of general revenues will increase to 49 percent by 2032, the trustees report said. 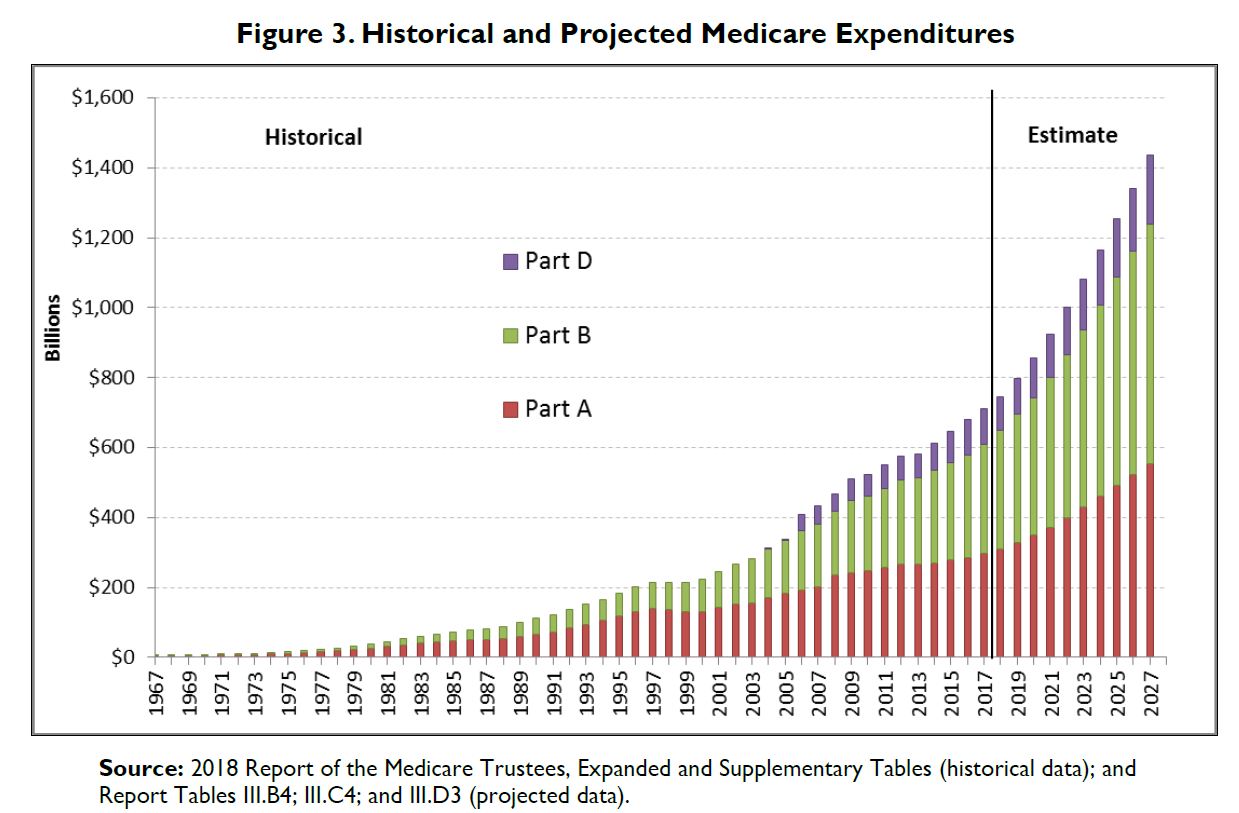 Separately, the Bipartisan Budget Act of 2018, which Trump signed in February, will have a negative impact on all parts of Medicare, the trustees’ report said.

That law, among other things, repealed the Independent Payment Advisory Board, a 15-member board created by the Affordable Care Act to reduce Medicare costs. As designed, the board would make recommendations for cutting spending that could only be overridden with a three-fifths majority of both houses of Congress, or Congress could institute its own reductions of an equal amount recommended by the IPAB. (The IPAB had not yet been formed.)

“The expenditures in this year’s report are higher than last year’s mostly due to (i) the Bipartisan Budget Act of 2018, which eliminated the Independent Payment Advisory Board and removed payment caps for certain therapy services, and (ii) higher projected Medicare Advantage (MA) payments attributable to higher risk scores for beneficiaries enrolled in MA plans,” the report said. (Risk scores are estimates of the cost of care for beneficiaries.)

As for Trump’s claim that “Medicare will be $700 billion stronger over the next decade thanks to our growth,” the Committee for a Responsible Federal Budget and Cubanski, of the Kaiser Family Foundation, were not aware of any economic projections that would improve Medicare’s finances by that amount.

The CRFB referred us to Table A-1 of the nonpartisan Congressional Budget Office’s April 2018 Budget and Economic Outlook, which projects the impact of economic revisions since June 2017 — including effects of newly enacted legislation and updated economic data. The CBO projected that the economic changes will result in an additional $92 billion in all payroll tax revenues, which includes Medicare and Society Security, over 10 years.

More than half of the additional economic growth was the result of recently enacted legislation, specifically the 2017 tax act, the 2018 budget act and the fiscal year 2018 appropriations law, the CBO report explained. “Updated data for key measures from the national income and product accounts (NIPAs) also led to economic revisions. (The NIPAs, which are produced by the Bureau of Economic Analysis, track components of the nation’s economic output and income that CBO uses in its economic analyses,)” CBO said.

So why did the president say Medicare will be $700 billion stronger over 10 years because of economic growth?

More precisely, the White House estimates that economic growth will generate an additional $858 billion more in payroll taxes over 11 years, from 2018 to 2028, compared with CBO projections.

But there are three problems with that logic, beginning with the fact that it doesn’t support what the president said.

First, the president said he strengthened Medicare by $700 billion over 10 years, but the White House gave us the impact of economic growth on all payroll revenues — including Social Security, which is the largest.

So, Trump is wrong about the impact of economic growth on Medicare even by his administration’s own numbers.

Second, the White House projects higher payroll tax revenues based on sustained economic growth through 2028. It projects real GDP will grow at an average annual rate of nearly 3 percent for the next decade — which is about a percentage point higher than most economic forecasters predict.

In August, CBO projected real GDP will grow 3.1 percent this year and 2.4 percent next year, but over the 10-year budget period, from 2018 to 2028, CBO projects an average annual growth rate of 1.9 percent.

The consensus among economic forecasters is that tax cuts and increased federal spending will stimulate the economy, but only in the short term, according to the CRFB.

Third, although Trump says “we pay for things through growth,” the additional payroll tax revenue generated by economic growth — even at the level projected by the White House — is a small fraction of the cost of Social Security and Medicare.

In its April report, CBO estimated that “spending for people age 65 or older in several large mandatory programs — Social Security, Medicare, Medicaid, and military and federal civilian retirement programs” — will increase from 38 percent of federal spending in 2018 to 45 percent in 2028. (That does not include federal spending on interest.)

Marc Goldwein, senior policy director at the Committee for a Responsible Federal Budget, told us in an email: “There has been no major Social Security or Medicare legislation enacted, so the programs are essentially on the same path they were on before the President took office.”

FactCheck.org Rating:
False
"Medicare will be $700 billion stronger over the next decade thanks to our growth."
Donald Trump
President of the United States
https://www.c-span.org/video/?c4749757/trump-economic-growth