A: No. There is no evidence to support that claim, posted in a viral, manipulated image.

A doctored image of Stacey Abrams shows the Democratic candidate for governor in Georgia holding a sign that labels herself a “Communist” and includes the hashtag “#MuslimBrotherhood.” Abrams is seen standing next to political activist Linda Sarsour, who wears a hijab.

“Heads up Georgia,” text above the image reads. “The Muslim Brotherhood is backing Abrams.”

There’s no evidence to support that claim, spread on Facebook with the help of more than 18,000 people who shared the manipulated photo.

The actual image, posted on Abrams’ Twitter account, was taken at a January rally in Atlanta that marked the anniversary of the 2017 Women’s March. Sarsour, a Palestinian-American Muslim, sits on the board of the Women’s March organization.

References to the Muslim Brotherhood — an influential political Islamist group that was started in 1928 — have been employed repeatedly in political ads and false stories.

While the organization itself officially renounced violence decades ago, Muslim Brotherhood offshoots include the terrorist group Hamas. Several countries have labeled the Brotherhood a terrorist organization, a designation that the U.S. has in the past considered, but that some experts say is unjustified. Conservatives have used comments by Sarsour — including an approving tweet about the Muslim Brotherhood in Egypt — to criticize the activist.

Regardless, we could find nothing to support the claim that the organization is “backing” Abrams, who is the daughter of United Methodist ministers and belongs to the Columbia Drive United Methodist Church.

Commenters on the altered image nevertheless conveyed a sense of agreement — either believing the image, or the message it represented.

“No Muslim brotherhood !” one remark reads. Another: “Georgia can’t be that stupid voting for terrorist to be there govenor [sic] who is back by a terrorist group t [sic] like the Muslim Brotherhood.”

One man said, “Come on! The sign is false! But, that pic of those two together in endorsement and collusion speaks volumes.” 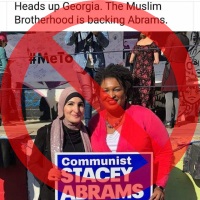