No border patrol officers were seriously injured in an encounter with migrants on Nov. 25, but a 2010 photo circulating online falsely claims to show a recently injured officer.

On Nov. 26, President Donald Trump incorrectly said that three border patrol agents “were very badly hurt through getting hit with rocks and stones” when a group of migrants tried to breach the U.S. border at the San Ysidro Port of Entry in San Diego. Shortly after the president’s remarks, a photo of an injured border patrol agent from 2010 began circulating online — with a caption that amplifies Trump’s false claim.

The picture shows a U.S. Customs and Border Protection officer, wearing a green uniform, with a bloodied face. It has been shared more than 7,000 times in less than 24 hours on Facebook with this caption: “This is what’s going on folks. A Border agent was hit by rock throwing from the other side[.]”

But that’s not true. The photo was taken in 2010, according to Rod Kise, spokesman for U.S. Customs and Border Protection. The officer in the picture was wounded by a rock thrown by drug smugglers in the Rio Grande Valley near the border patrol’s McAllen Station, Kise said. That is about 1,500 miles and two states away from where the encounter between migrants and border patrol agents happened on Nov. 25.

That photo has been used online for years. It was posted by a site called Homeland Security Today in 2013 and has appeared on the popular conservative news site, Breitbart, at least twice since then.

Not only is the photo eight years old, the message it sends in the most recent adaptation is wrong. No U.S. border patrol agents were seriously injured when some migrants rushed the border and were met with tear gas on Nov. 25 at the border crossing between San Diego and Tijuana.

U.S. Customs and Border Protection Commissioner Kevin McAleenan said: “U.S. Customs and Border Protection agents and officers in San Diego effectively managed an extremely dangerous situation involving over 1,000 individuals who sought to enter the U.S. unlawfully in large groups. They did so safely and without any reported serious injuries on either side of the border… Four agents were hit with rocks, but were wearing protective gear and did not suffer serious injuries.”

Similarly, Department of Homeland Security Secretary Kirstjen Nielsen said in a statement on Facebook that “no one was injured” during the border skirmish.

Update, Nov. 29: Rod Kise, spokesman for U.S. Customs and Border Protection, told us on Nov. 29 that the photo was actually taken in 2010, not 2013 as he had originally thought. We updated the headline to say that the photo is eight years old, not five years old, and corrected the year in the story. 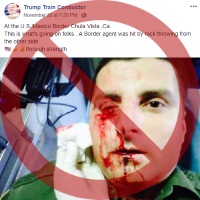