Q: Did Kurt Cobain predict a Donald Trump presidency more than 20 years ago?

A: No. There is no evidence he did, and Cobain’s former manager labeled the quote a fake.

There is no evidence the late Kurt Cobain said Donald Trump might become president.

That claim is made in a viral meme that displays a black-and-white photo of the former Nirvana frontman along with this made-up quote: “In the end I believe my generation will surprise everyone. We already know that both political parties are playing both sides from the middle and we’ll elect a true outsider when we fully mature. I wouldn’t be surprised if it’s not a business tycoon who can’t be bought and who does what’s right for the people. Someone like Donald Trump as crazy as that sounds.” 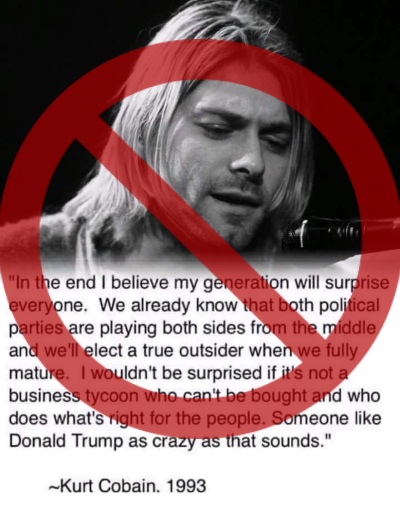 The meme, a version of which was reportedly first shared on a pro-Trump Facebook page in 2016, claims that Cobain made this prediction in 1993 — a year before the singer’s death.

Danny Goldberg, one of Nirvana’s former managers, emphatically rejected this possibility when the meme went viral again this year. In an opinion piece for The Nation in August, Goldberg wrote, “I know that the quote is not only made up but is also a grotesque perversion of Kurt’s beliefs.”

We can’t say what Cobain would think of the current political landscape, but we know he wasn’t shy about sharing his political beliefs with reporters during his career.

In a 1993 interview with The Advocate, Cobain discussed his decision to vote for Bill Clinton in the 1992 presidential election (though he preferred one of Clinton’s primary rivals, Jerry Brown). In the article, Cobain said he would perform at the White House, if asked. He also recalled his disappointment with Ronald Reagan’s presidential victory in 1980.

At other times, the late singer similarly expressed his displeasure with the Republican Party.

In a 1992 interview with Argentinian journalist Sergio Marchi, Cobain was very critical of the GOP, saying: “… the Democrats are not close either morally or philosophically to what I think. The Democrats are very conservative, but at least they’re not as conservative as the Republicans. Republicans are the incarnation of Satan. I hate them. For me the word Republican is a bad word; when someone says Republican they are saying ‘cheat.’ It’s the most offensive term you can say to someone.”

In that interview, Cobain did mention his preference to see someone “who is not a professional politician” become president, but when asked for his opinion of business tycoon Ross Perot, then a third-party candidate, Cobain responded, “Nah, the guy sucks. He’s rich; I don’t trust him as president.”

Although, Cobain suggested he would prefer Perot over Clinton and then-President George H. W. Bush, but didn’t “want to waste” his vote.

Marchi, Sergio. “I Used To Practice When I First Grabbed The Guitar.” Cobain on Cobain: Interviews and Encounters, edited by Nick Soulsby, Chicago Review Press, 2016. 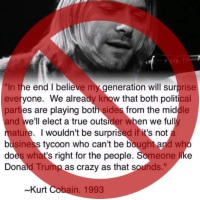