Q: Did a “neo Nazi” leader get a meeting at the White House while CNN’s Jim Acosta was banned?

A: No. Patrick Casey, head of Identity Evropa, went on a publicly available tour of the White House and posted pictures of it on Twitter.

After Jim Acosta, CNN’s chief White House correspondent, was stripped of his White House press pass on Nov. 7, a meme started circulating online claiming that the leader of a “neo Nazi” group had been granted a “White House visit.”

The meme shows a picture of Acosta with the text “banned from White House” next to a picture of Patrick Casey, head of a white nationalist organization called Identity Evropa, with the text “gets White House visit.” Identity Evropa says its members are “Identitarians” who believe “inequality is a fact of life, and ethnic diversity … is an impediment to societal harmony.”

The meme was posted by a liberal activist organization called Other98 and shared more than 20,000 times on Facebook.

But the claim it makes is misleading.

While it’s true that Casey posted photos of himself at the White House on his Twitter feed on Nov. 7, he wasn’t an invited guest of the Trump administration, as the meme suggests. It was one of those photos, with Casey giving a thumbs-up outside of the White House, that was used in the meme.

Casey had posted the photos with this caption: “Evropa has landed at the White House!” Later that day, he posted a tweet that said: “TO CLARIFY: I attended the White House during a tour, for which tickets are freely available to the public.”

We are unable to check White House visitor logs because the Trump administration doesn’t make them public, and our request for comment from the administration wasn’t answered. However, White House Press Secretary Sarah Sanders told the Jewish Telegraphic Agency: “He was one of more than twenty-five thousand people who came to the White House Fall Garden Tour, which is open to the public. Free tickets are made available to anyone who wants to attend.”

Sanders, Sarah. White House Press Secretary. “As a result of today’s incident, the White House is suspending the hard pass of the reporter involved until further notice.” Twitter. 7 Nov 2018. 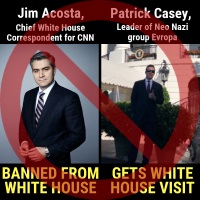