A claim that the Bush administration approved $50 billion for construction of a border wall is false.

In 2006, former President George W. Bush signed into law the Secure Fence Act of 2006, which called for about 700 miles of fencing along the border with Mexico. That’s a little more than a third of the length of the 1,933-mile border.

Currently, there are 654 miles of fence on the border, including 354 miles of pedestrian barriers and 300 miles of vehicle barriers. An amendment later loosened the terms of the law and gave the Department of Homeland Security discretion in how and where to build it. Then DHS determined that it needed fewer miles of fence than initially designated in the law.

Now, with the government shut down due to an impasse over $5.7 billion sought by President Donald Trump to fund another 234 miles of fencing, that law has been misrepresented in viral memes circulating on social media claiming that it came with a $50 billion allowance that wasn’t used.

One popular version shows a picture of Bush with the text: “Where is the $50 billion I approved in ’06 for the Secure Fence Act that Obama was supposed to build?”

But the 2006 law came with no explicit funding. A spending bill for the Department of Homeland Security passed that year did include $1.2 billion for “fencing, infrastructure, and technology,” though.

Although the Congressional Budget Office didn’t estimate the cost of the Secure Fence Act of 2006, the agency did estimate the cost, per mile, of fencing proposed in another bill that same year. The CBO projected that it would cost about $3 million per mile for fencing along the southern border. That would put the total estimated cost of 700 miles of fencing at about $2.1 billion in 2006.

And that’s close to what the government ended up spending to construct more than 500 miles of fence along with roads and other infrastructure, according to a recent report from the Government Accountability Office. Between fiscal years 2007 and 2015, the government had spent $2.4 billion to expand the total miles of fencing on the southwest border from 119 miles to 654 miles.

So, contrary to what the meme suggests, the fence project was completed and didn’t cost close to $50 billion.

FactCheck.org Rating:
False
A meme shows George W. Bush asking, “Where is the $50 billion I approved in ’06 for the Secure Fence Act that Obama was supposed to build?”
Viral meme
- 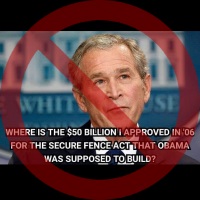