El Chapo, whose name is actually Joaquín Guzmán Loera, is scheduled to be sentenced on June 25.

The three-month trial that preceded his conviction featured dramatic revelations, including stories of an attempted murder with a poisoned arepa and escaping drug enforcement officers at a safe house that had a secret tunnel under a bathtub. One reporter covering the trial called it “a federal court tele-novela.”

Still, producers of misinformation online have embroidered the case with politically tinged falsehoods.

But that’s not true.

Guzmán didn’t testify during his trial. His entire defense lasted just one day, according to the docket, and extensive media coverage at the time shows he didn’t take the stand. So, he didn’t testify to anything, let alone that he had made payments to U.S. politicians.

One person who did take the stand, Colombian drug lord Alex Cifuentes Villa, testified that among the Mexican officials who had been bribed by Guzmán’s cartel was former Mexican President Enrique Peña Nieto. But there was no testimony about Pelosi, Schiff or Clinton receiving money.

The claim is similar to one made in another meme circulating online that we’ve written about. That one alleges that Guzmán donated $15 million to Clinton’s 2016 presidential campaign, a claim that is based on a hoax story published two years ago on a now-defunct website. 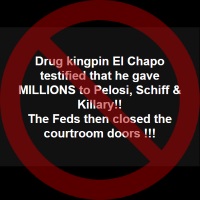