A photo showing a large group of people apprehended at the southern border is circulating online with the false information that it was taken this month. It is from 2010.

A photo of handcuffed people trudging through the Arizona desert shows immigrants who were apprehended while trying to enter the U.S. illegally. The photo was taken nearly nine years ago.

That’s not true. The 105 people shown in the picture were apprehended on April 28, 2010, according to a press release from U.S. Customs and Border Protection that included the photo.

Using a mobile surveillance system, border patrol agents spotted the immigrants traveling in three groups, and then rounded them up with the help of a helicopter crew from the Office of Air Marine, according to the release.

The photo began recirculating this year around the time when President Donald Trump and Congress were negotiating funding for the president’s proposed border wall. Trump ultimately rejected the nearly $1.4 billion in wall funding as inadequate and declared a national emergency at the southern border, a move that would allow him to reallocate more federal funds for the wall without congressional approval.

In declaring a national emergency, the president described the situation at the southwest border as an “invasion of our country.”

The actual number of apprehensions at the border has increased in recent years, but it remains historically low compared to the peak in 2000.

Still, the number of apprehensions is down significantly from what it was at the turn of the century.

U.S. Government Accountability Office. “Progress and Challenges with the Use of Technology, Tactical Infrastructure, and Personnel to Secure the Southwest Border.” 15 Mar 2018. 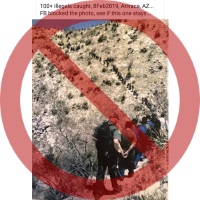