A meme making a bogus claim about the U.S. giving gold to Afghanistan is circulating online.

One meme circulating on Facebook makes the bogus claim that, “Trump’s audit of Obama has found a transfer of gold to Afghanistan finally the traitor is being exposed!”

It has been shared more than a thousand times from one page that posted in February and has amassed a trail of comments like this one: “Traitor, liar and not a U.S. Citizen. Hang this thief on town square.”

But the meme is made up. It was created by a Facebook page belonging to a network of self-described sites known as America’s Last Line of Defense. The Facebook page that originally shared the meme in December writes on its “About” page: “Nothing on this page is real. It is a collection of the satirical whimsies of liberal trolls masquerading as conservatives. You have been warned.”

However, the meme isn’t labeled as satire, so once it is shared online there’s no way to know it was made up.

The picture used in the meme, showing pallets full of gold bars, is from the Bank of England, which opened an exhibition in 2015 called “Discover Gold” that shared some of the contents of its vault to visitors at the Bank of England Museum. It has nothing to do with the U.S. or Afghanistan.

Also, there is no “Trump audit of Obama” and there have been no reports of the U.S. transferring gold to Afghanistan. That claim, though, is reminiscent of Trump’s criticism during the 2016 campaign of a $400 million payment that the Obama administration made as part of a legal settlement to reimburse Iran for the purchase of U.S. military equipment in the late 1970s that it never received.

The claim that the U.S. transferred gold to Afghanistan, however, is unfounded.

America Loves Donald Trump. Facebook page. “Trump’s audit of Obama has found a transfer of gold to Afghanistan finally the traitor is being exposed!” 15 Dec 2018. 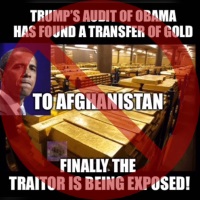