The video, which appeared on Sanders’ official Twitter and Facebook accounts, received more than 600,000 combined views. It features Warren Gunnels, the senator’s top aide on the Senate budget committee, “fact-checking” the president’s State of the Union address.

Gunnels covers a lot of ground — but we’re going to focus here on his claims involving the unemployment rate for the general population and employment data for those ages 25 to 54.

In his State of the Union address, Trump said “unemployment has reached the lowest rate in over half a century.” The official unemployment rate, which was 4 percent in January, dropped as low as 3.7 percent in September and November — marking the first time it had been that low since 1969.

In the “fact-check” video, Gunnels mocks the president and takes issue with Trump’s use of the official unemployment rate — which, as a candidate, Trump regularly dismissed as a “joke.”

“The reality is that the real unemployment rate — which includes those who have given up looking for work and those who are working part time when they need a full-time job — is 8.1 percent, not 4 percent,” Gunnels says.

The official unemployment rate represents people who are out of work and actively seeking work in the last four weeks.

Gunnels, instead, is referring to the U-6, an “alternative measure of labor underutilization,” which includes the total unemployed, discouraged workers who have stopped looking for work, and part-time workers who cannot find full-time work for economic reasons.

Gunnels is right that the U-6 rate was 8.1 percent in January. But this is what he doesn’t tell his viewers: Under Trump, the U-6 rate had dropped to its lowest level in 17 years.

Even the current rate of 8.1 percent is 1.2 percentage points lower than it was when Trump took office and much lower than the monthly average of 10.4 percent since 1994, which is when BLS started to publish this and other alternative measures of labor underutilization.

The below chart, based on BLS data, shows how using one data point without any context — as Gunnels did in his “fact-check” video — is misleading. 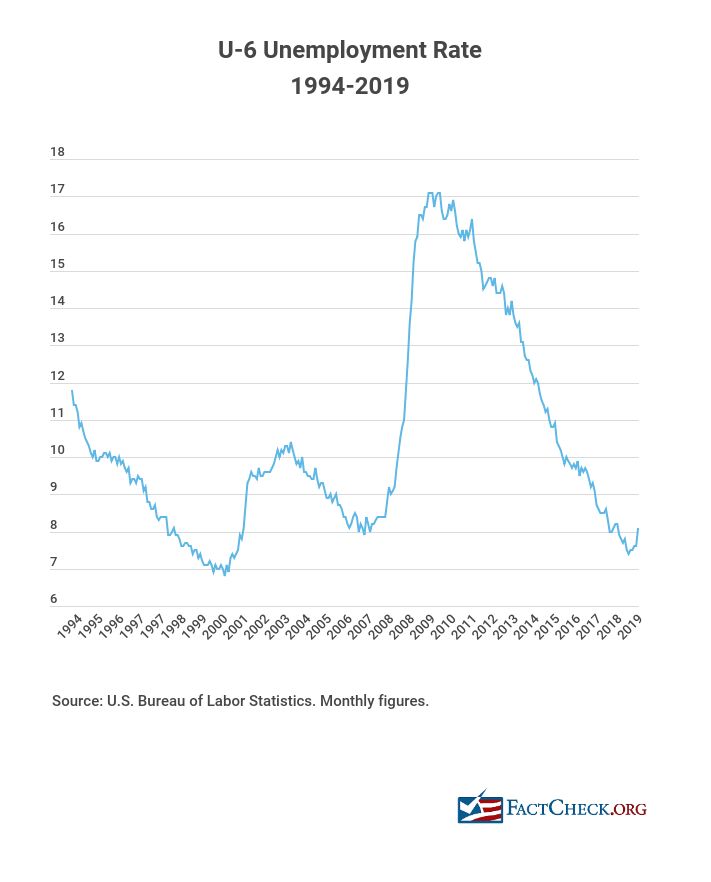 In the video, Gunnels moves directly from the “real” unemployment rate to the number of people working — or rather not working.

This time Gunnels is cherry-picking data to make a partisan attack.

If 79.9 percent of the 25-to-54 population was working in January, then 20.1 percent was not working. So Gunnels is right about that.

But, again, the Sanders “fact-check” video doesn’t tell viewers all of the pertinent facts.

It omits these facts about the latest employment-population ratio:

Instead, Gunnels cherry-picks January 2000 as his basis of comparison to make it appear that the trend is down, when, in fact, it is up. (Quick aside: The ratio was actually 81.8 percent in January 2000, not 81.1 percent as Gunnels said in his email to us.)

Here is a chart that puts the employment-population ratio for January 2019 into context, dating back to 1948: 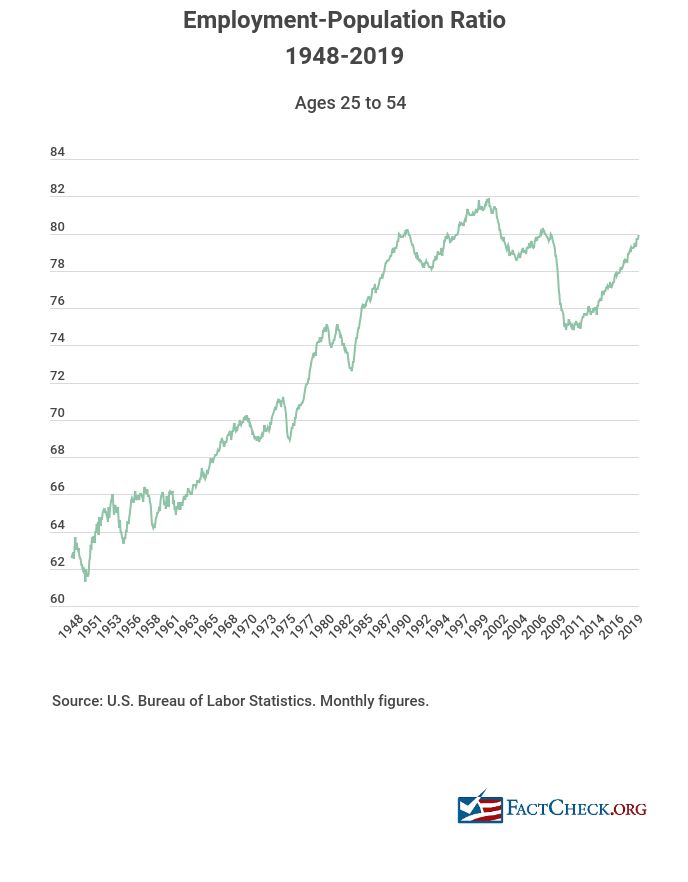 Gunnels takes the position that Trump was “wrong” when the president said the U.S. has “the hottest economy anywhere in the world.” That’s his opinion.

But he cannot misrepresent the facts — especially in a “fact-check” video. Yes, the labor figures he uses are accurate, but they leave a skewed impression of the economy under Trump without context.

Instead, we invite readers to view our fact-check video of the president’s State of the Union address.

FactCheck.org Rating:
Cherry Picks
"Over 20 percent of Americans between the ages of 25-54 do not have a job, which is higher than was the case 19 years ago."
Warren Gunnels
Budget committee staff director for Sen. Bernie Sanders
https://www.facebook.com/senatorsanders/videos/405220073632470/ 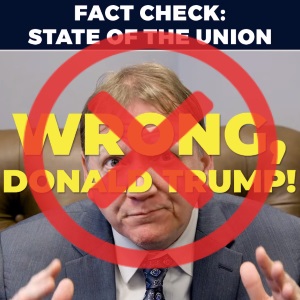