For over two years, memes have been circulating with a picture of Sen. Elizabeth Warren next to a fake, Islamophobic quote condoning rape.

An old meme that has been debunked before is circulating again on Facebook.

It features a picture of Sen. Elizabeth Warren of Massachusetts, who is one of many Democrats running for president, next to a quote that says: “If women need to be raped by Muslims to prove our tolerance, so be it. Then thank goodness for Planned Parenthood.”

The quote is fabricated, though. Nowhere in the public record is there evidence Warren made that statement — there are no news reports about it and those remarks are not found in the Congressional Record. Internet searches for those exact words turn up only different versions of the meme.

One of the most popular versions was posted by a prolific meme-maker who goes by the name Mike Rilling — he posts ultra-conservative politics and anti-vaccination messages on his Facebook pages. He did not respond to a request for comment.

Facebook users have been duped by the fake quote since it started circulating widely in early 2017. The Washington Post reported that a former Republican state official in Florida posted the meme on his Facebook page at the time. And two years later, people are still reposting the meme with statements like this one: “Every Woman in America should hate this ignorant fool! I don’t need to be raped by anyone period.”

FactCheck.org Rating:
False
Meme claims Sen. Elizabeth Warren said: "If women need to be raped by Muslims to prove our tolerance, so be it."
Viral meme
- 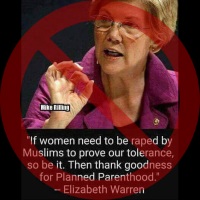