Viral posts online claim incorrectly that Germany has requested the removal of the American ambassador. An opposition party lawmaker in Germany’s Parliament called for that, but the German government itself has not taken that position.

America’s ambassador to Germany, Richard Grenell, has been in Berlin for a little less than a year and has been at odds with some German officials from the start.

But the claim that Germany has called for his removal isn’t true, although it has been shared widely on social media. That claim came from the Twitter account of a user who describes himself as “very left” and, on March 19, tweeted: “In a first, Germany is requesting the removal of the Trump appointed ambassador to Germany, #RichardGrenell. They consider him to stoke racism and fascism on the country. That’s where we’re at, folks. The Germans want the American gone, because he’s a Nazi.”

It has been retweeted more than 23,000 times on Twitter and it was made into a meme that has been shared 13,000 times on Facebook. The Kerr County Democrats, in Kerrville, Texas, posted the text on their Facebook page, for example.

But Germany has not requested that Grenell be removed. Rather, Wolfgang Kubicki, a member of the Free Democrats, an opposition party in the German Parliament, said that the German foreign minister should consider declaring Grenell “persona non grata.”

“Any US diplomat who acts like a high commissioner of an occupying power must learn that our tolerance also knows its limits,” Kubicki reportedly said.

The comments from both members of Parliament were made in response to Grenell’s criticism of Germany’s plans for defense spending, which won’t meet NATO spending goals, not because they “consider him to stoke racism and fascism,” as the tweet claimed.

This isn’t the first time that Grenell has sparked the ire of German politicians, though. In June 2018, Grenell said in an interview with the conservative news website Breitbart that he wanted to “empower other conservatives throughout Europe.” That prompted rebukes from some German politicians, including Martin Schulz, a member of the Social Democrats Party, who said, “If a German ambassador in Washington said, ‘I’m here to strengthen the Democratic Party,’ he would be thrown out immediately.”

So, while some German politicians have criticized Grenell, that’s not the same as the German government formally requesting his removal.

Gregor, Andrew James (@andrewjgregor). “In a first, Germany is requesting the removal of the Trump appointed ambassador to Germany, #RichardGrenell. They consider him to stoke racism and fascism on the country. That’s where we’re at, folks. The Germans want the American gone, because he’s a Nazi.” Twitter. 19 Mar 2019.

FactCheck.org Rating:
False
"In a first, Germany is requesting the removal of the Trump appointed ambassador to Germany."
Viral meme
- 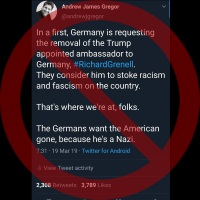