Henry Winkler is very much alive, contrary to a hoax story about his “death” that falsely claims he had been a “huge Trump supporter” and an NRA member.

Henry Winkler, the actor who has been on television shows from “Happy Days” to “Arrested Development,” is not dead. He just hosted an acting workshop at the South by Southwest Festival in Austin, Texas, on March 10.

But a hoax story claiming that Winkler died in January has been shared more than 150,000 times on Facebook. The story also politicized his alleged death by saying he had been a “huge Trump supporter” and a “lifelong member of the NRA.”

Neither of those things is true, either.

When he was asked about the political beliefs of his former co-star Scott Baio, who has been a vocal supporter of President Trump, Winkler said unequivocally, “I completely disagree with his politics.”

In another interview, MSNBC’s Hugh Hewitt asked Winkler, “Do you have anything good to say about Donald Trump?” After a pause, Winkler said, “I’ll get back to you on that.”

Winkler filmed a video endorsing then-Sen. Barack Obama for president in 2008, and he has given thousands of dollars to other Democratic candidates, according to federal campaign records compiled by the Center for Responsive Politics. He also derided the Republican Party in 2010 for saying “no about everything” on Obama’s political agenda.

As for the claim that Winkler is a “lifelong member of the NRA,” he actually was listed by the organization’s lobbying arm as an “anti-gun” celebrity in 2012.

The story making these false claims was originally published on a self-described satire website. Its “About” page, says, “everything on this website is fiction.”

But, as often happens, the story was copied and posted by at least one other site that didn’t have a disclaimer, and the picture claiming that Winkler died in 2019 started circulating as a meme on social media. 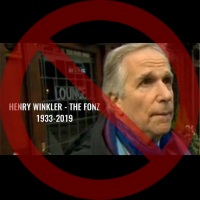