Q: Did House passage of H.R. 1 allow noncitizens to vote?

A: No. That bill would enact a host of changes to election laws, but it does not permit noncitizens to vote.

Is it true that the Democrats in the House of Representatives voted for the right of illegal immigrants to vote in the US?

When Democrats reclaimed control of the House in January, they introduced H.R. 1 — a bill number designated to signal the importance of this legislation, which is designed to combat political corruption and increase voter participation. The bill, known as For the People Act, keeps a campaign pledge from the midterm election.

The bill passed the House along party lines on March 8, but it’s unlikely to move forward. Senate Majority Leader Mitch McConnell has already said the Republican-controlled chamber would not take it up.

Even so, the measure has generated confusion among readers and social media users, where distortions and falsehoods about the bill have spread.

The comprehensive bill, which would make numerous changes to election laws, doesn’t do that.

Among the many things the bill would do, if it were ever to become law: make Election Day a federal holiday; require states to automatically register eligible voters; compel states to create independent commissions to oversee redistricting; implement campaign-finance and election-security changes; and require presidential and vice presidential candidates to release 10 years of tax returns. Trump in 2016 broke with the tradition of past presidential candidates by not releasing his tax returns.

The confusion regarding noncitizens stems from the use of a legislative maneuver, known as a motion to recommit, that represented the last opportunity for the Republicans to amend the bill before it was passed.

On March 8, the same day the House cast its final vote on the bill, Texas Republican Rep. Dan Crenshaw introduced a Motion to Recommit H.R. 1 to the Judiciary Committee with instructions to add language condemning voting by “illegal immigrants.”

But “sense of Congress” provisions, such as the one offered by Crenshaw, have “no force of law,” as explained in a Congressional Research Service report.

“A ‘sense of’ resolution is not legally binding because it is not presented to the President for his signature,” the CRS report said. “Even if a ‘sense of’ provision is incorporated into a bill that becomes law, such provisions merely express the opinion of Congress or the relevant chamber. They have no formal effect on public policy and have no force of law.”

Federal law explicitly prohibits noncitizens from voting in federal elections, and no state has allowed it since the 1920s.

The vast majority of House Democrats voted against Crenshaw’s motion, as did one Republican, Rep. Justin Amash of Michigan.

Crenshaw, while speaking on the floor of the House, invoked San Francisco as an example of noncitizens voting: “The city of San Francisco has effectively cancelled out the votes of its citizens and replaced it with illegals’.”

A total of 12 jurisdictions throughout the country allow noncitizen residents to vote in some local elections regardless of legal status, according to Ron Hayduk, a professor of political science at San Francisco State University who studies immigrant voting and has advocated allowing noncitizens to vote. Those jurisdictions include San Francisco (for school board elections), Chicago (for local school council elections) and 10 towns in Maryland where noncitizens can vote in local races.

And, as we’ve written previously, experts say voter fraud by noncitizens is rare, in part because of the consequences, which could include deportation.

Even though Crenshaw’s motion would have had no policy effect if approved, Democrats’ rejection of it became the subject of headlines such as this one in the Washington Times: “House votes in favor of illegal immigrant voting.”

A website known for distributing false news, News Punch — formerly known as Your News Wire — carried a similar headline and opened with the misleading claim that “House Democrats voted Friday to allow illegal immigrants to vote in American elections — turning their back on the U.S. Constitution.”

Again, that’s misleading: The motion would have had no effect on the law, and there was no vote to give immigrants in the country illegally the right to vote. Voting by noncitizens is prohibited in federal and state elections, as well as almost all local elections — save for a few exceptions on the local level. That was the case both before and after the House’s approval of H.R. 1.

Harper-Ho, Virginia. “Noncitizen Voting Rights: The History, the Law and Current Prospects for Change.” Law & Inequality: A Journal of Theory and Practice. Vol. 18 (2000).

Lynch, Megan S. “The Motion to Recommit in the House of Representatives.” Congressional Research Service. 6 Jan 2016.

FactCheck.org Rating:
Misleading
"We had legislation on the floor to prevent people that are here illegally from voting. And you saw Democrats vote against that. In essence, voting to allow people here illegally to vote in elections."
Rep. Steve Scalise
House Minority Whip 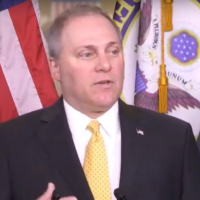