A meme circulating on Facebook gives the false impression that there is no cap on the number of refugees that can be admitted to the U.S., and that Social Security beneficiaries did not receive a cost-of-living increase this year.

A meme that was only partially true at the time it was created is still circulating three years later, when none of what it says is accurate.

The meme, which appears to have been first shared in early 2016 by a website that has a history of spreading misinformation, says: “You’re telling me we have the money to ‘relocate’ and ‘resettle’ an undetermined number of ‘refugees’ … But not enough to supply our seniors with a cost of living increase?”

And the picture in the meme actually shows refugees at the border of Syria and Iraq in 2013. It does not show refugees in the U.S. (The United Nations estimates that nearly 5.7 million people fled Syria during the civil war, which began in March 2011.)

The meme’s other claim about Social Security benefits is also false.

The COLA is determined by the increase in the Consumer Price Index for Urban Wage Earners and Clerical Workers, which is tabulated by the Bureau of Labor Statistics. There have been three years — 2010, 2011, and 2016 — when that index hasn’t yielded an automatic increase in Social Security benefits because there was a decline in the CPI-W.

For 2019, however, there was a 2.8 percent increase in benefits. So, Facebook pages still posting the meme are misinforming their followers. One recent post, which has been shared 117,000 times, caused a Facebook user to leave this comment: “There is so much said about about [sic] taking care of refugees an [sic] sending money to other countries. What about taking care of deficit and the people of the UNITED STATES.”

Since the Syrian civil war began in March 2011, the U.S. has accepted 21,334 Syrian refugees — but only 41 of them came to the Unites States last year, according to the State Department’s Refugee Processing Center.

FactCheck.org Rating:
False
"...We have the money to 'relocate' and 'resettle' an undetermined number of 'refugees' … But not enough to supply our seniors with a cost of living increase?"
Viral meme
- 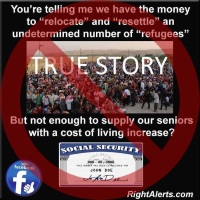