An old meme from Ben Carson’s days as a Republican candidate for president is circulating again. But there’s still no evidence that he said, “My mother raised me with no help from the government.”

In November 2015, Ben Carson briefly led the polls for candidates seeking the Republican nomination for president.

Now that he’s the secretary of the Department of Housing and Urban Development, a meme from his days as a candidate is circulating again on Facebook. The meme claims that on Nov. 7, 2015, Carson said: “My mother raised me with no help from the government. We had food stamps and welfare and Section 8 housing, but we made it on our own.”

Many of those posting it now are doing so in defense of Rep. Alexandria Ocasio-Cortez, adding the observation: “And conservatives want to laugh at AOC?”

Carson wrote in his 1990 autobiography, Gifted Hands, that his family relied on government assistance, specifically food stamps, for a time when he was growing up. But there is no evidence in the public record that Carson said what the meme claims.

Nov. 7, 2015, was a Saturday; Carson sent one tweet that day, but it was about donations to his campaign. The only extensive comments we found him making were in an interview taped that night for a segment that aired on NBC’s “Meet the Press” the next morning. In that interview, Carson answered questions about his claims of being a violent teen and being offered admission to West Point. He did not talk about food stamps and public housing, as the meme claims.

Actually, an early version of the Carson meme included the web address of a now-defunct Facebook page that described its content as political “satire and parody.” That indicates the meme was never meant to be taken seriously in the first place.

FactCheck.org Rating:
False
A meme claims Ben Carson said, "My mother raised me with no help from the government. We had food stamps and welfare and Section 8 housing, but we made it on our own."
Viral meme
- 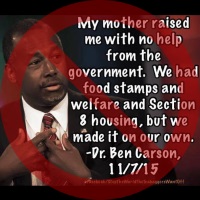