A meme posted on a popular progressive Facebook page leaves out several words and important context in a quote from White House adviser Stephen Miller.

The meme features two pictures. One shows Miller next to a quote that says: “The powers of the president will not be questioned.”

The other shows President Theodore Roosevelt next to a quote that says: “To announce that there must be no criticism of the president, or that we are to stand by the president, right or wrong, is not only unpatriotic and servile, but is morally treasonable to the American people.”

The problem with the Miller quote is that it’s incomplete and out of context.

In an appearance on CBS’ “Face the Nation” on Feb. 12, 2017, Miller answered questions about President Donald Trump’s original executive order banning people from seven predominately Muslim countries from entering the United States. Several states challenged the ban and a federal judge blocked its enforcement just days after it was issued.

That’s the background for Miller’s statement one week later, when he said this:

Miller, Feb. 12, 2017: Well, I think that it’s been an important reminder to all Americans that we have a judiciary that has taken far too much power and become in many cases a supreme branch of government. One unelected judge in Seattle cannot remake laws for the entire country. I mean this is just crazy, John, the idea that you have a judge in Seattle say that a foreign national living in Libya has an effective right to enter the United States is — is — is beyond anything we’ve ever seen before.

The end result of this, though, is that our opponents, the media and the whole world will soon see as we begin to take further actions, that the powers of the president to protect our country are very substantial and will not be questioned.

The only words used in the meme are the ones shown in bold above. The way they are presented in the meme makes it sound like he made a more sweeping statement about presidential power than he did, particularly when paired with the Roosevelt quote.

That Roosevelt quote got attention when Jeff Flake, a former U.S. senator from Arizona, used it in a 2017 speech announcing that he would not seek reelection. The speech was critical of Trump and the political climate.

Shortly after Flake’s speech, a Time magazine article pointed out that Roosevelt wrote those words during a time when he was often critical of the sitting president, Woodrow Wilson.

FactCheck.org Rating:
Distorts the Facts
A meme claims Stephen Miller said: "The powers of the president will not be questioned."
Viral meme
- 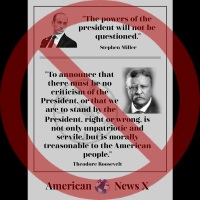