Sen. Kirsten Gillibrand has not proposed giving Social Security benefits to “illegal aliens,” as a popular meme claims. She wants to overhaul the immigration system to give individuals in the U.S. illegally a way to become citizens and collect benefits after paying into Social Security.

At a campaign stop in Davenport, Iowa on March 19, Sen. Kirsten Gillibrand, one of 23 people who have announced they are seeking the Democratic nomination for president, answered a question on immigration.

A woman in the crowd asked: “Would you please talk a little about immigration — what you’ve done, what you see — both broadly, the DREAMers, the people detained at for-profit prisons, separated children, and the asylum seekers?”

Gillibrand took about five minutes for her answer and, halfway through her remarks (at the 19:43 mark of the Facebook live video), she said: “So, what will I do? I have a lot of ideas. First: we need comprehensive immigration reform. If you are in this country now, you must have the right to pay into Social Security, to pay your taxes, to pay into the local school system, and to have a pathway to citizenship. That must happen.”

Shortly after she made that statement, it was spun by conservative pundits. Former Arkansas Gov. Mike Huckabee, for example, characterized it this way during an appearance on Sean Hannity’s Fox News show: “If a person comes here illegally… let’s not only give them grandma’s Social Security, let’s toss in a car.” He went on, “I hope Kirsten Gillibrand has to go out and talk to people in their 70s, who can barely afford food, and tell them that they’re going to not get their Social Security raised because we’re going to be giving it to people who broke into this country illegally.”

That interpretation of Gillibrand’s statement was then cemented in a meme that’s been circulating on Facebook and says: “Sen. Kirsten Gillibrand says that she wants to give Social Security benefits to illegal aliens.”

That’s not what Gillibrand said. She called for “comprehensive immigration reform” and said that people in the U.S. illegally “must have the right to pay into Social Security” and pay their taxes.

Gillibrand’s campaign spokeswoman, Meredith Kelly, clarified the candidate’s statement for us through email.

“Senator Gillibrand simply made a factual statement: undocumented immigrants already do pay into Social Security and income taxes, but get none of the benefits that they would as citizens,” Kelly wrote. “Under her plan for comprehensive immigration reform, they would have a pathway to earn their citizenship and those benefits that they already pay into. This is deliberate misinformation that has already been debunked.” 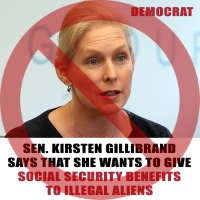