To hear politicians tell it, wages are rising at the fastest rate in a decade, are the same as they were 45 years ago and are at a 60-year low. And all three claims could be correct, depending on what measure is used to justify it.

Parsing the political claims on wages is an exercise in fun with statistics. There are several different ways to measure what’s happened to workers’ paychecks, leading to disparate and conflicting claims, and confusing messages to voters.

“There’s not necessarily one way [to look at wages] and that’s why you can get all the conflicting claims,” Jay Shambaugh, director of The Hamilton Project and a senior fellow in economic studies at the Brookings Institution, told us.

The bottom line, as shown in the graph below from the Bureau of Labor Statistics, is that real wages over the long-term peaked in the early 1970s, before generally falling over the next few decades and then beginning to climb back up starting in the mid-1990s.

We used real (inflation-adjusted) average weekly earnings for production and nonsupervisory employees to illustrate the decades-long trends. Real average hourly wages for those workers shows a similar trend. Shambaugh, who served on the Council of Economic Advisers under the Obama administration, said the rank-and-file measure gives the average of the bottom 80% of wage earners and is a good measure of a “typical worker.” 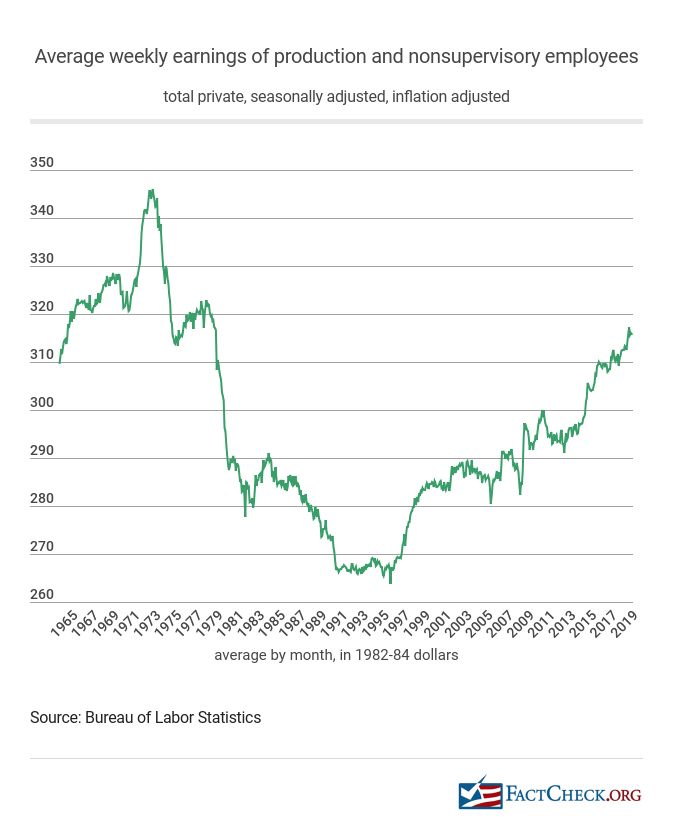 “I don’t know that there is a best measure,” Michael R. Strain, the director of economic policy studies and resident scholar at the American Enterprise Institute, told us. “I really think it just depends on what you’re trying to look at.” To evaluate what’s happened to wages, you need to pick a measure, then pick a way to adjust for inflation, and then pick a base year for comparison, Strain said.

And each decision can lead to a different result.

Let’s take a closer look at the individual claims.

In a May 31 proclamation on homeownership month, President Donald Trump said that “wages are rising at the fastest rate in a decade.” More recently, Trump has exaggerated the claim to “many decades.”

For instance, on June 18, Trump told a crowd in Orlando in launching his reelection campaign, “These are the same career politicians who presided over decades of flat wages,” adding later: “Wages are rising at the fastest rate in many decades, and really what’s nice is they’re rising the fastest for the lowest income Americans.”

The same day, Sen. Bernie Sanders, a Democratic presidential candidate, told CNN’s Erin Burnett: “For the last 45 years the average American today has not seen a nickel more in real wages than he or she got 45 years ago. That’s pretty crazy.” He made a similar claim that day to MSNBC’s Andrea Mitchell.

The president appears to echo Sanders in saying there have been “decades of flat wages.” In fact, the Trump campaign pointed us to a 2018 Pew Research Center report that said the “average hourly wage has just about the same purchasing power it did in 1978, following a long slide in the 1980s and early 1990s and bumpy, inconsistent growth since then.”

But it’s not true that wages have been “flat” for “decades.” Wages have risen, faster than inflation, over the last several presidencies.

Trump’s own Council of Economic Advisers contradicts his “decades of flat wages” claim, saying 2018 was “the sixth consecutive year of positive real hourly earnings growth for nonsupervisory workers and the longest streak since the eight years of consecutive earnings growth from 1995 through 2002.” (The CEA adjusts for inflation using the Personal Consumption Expenditures Price Index, or PCE, not the Consumer Price Index that BLS uses.)

As our graph above illustrates, BLS figures also show many years of real wage growth over the last two-plus decades.

It is true that inflation-adjusted wages (average weekly for production and nonsupervisory workers) peaked in February 1973 at $345.95, and then fluctuated but generally declined, hitting a low point of $263.73 in January 1996. They have again fluctuated since, but they’ve been on a general upward trend. They have increased 2.4% since Trump took office, from an average $308.21 per week to $315.74 per week in May, the most recent figures available from the Bureau of Labor Statistics. Technical note: All wage figures cited in this story from BLS are calculated in 1982-84 dollars – not current 2019 dollars.

During Obama’s last four years in office the average weekly earnings for production and nonsupervisory workers went up 4.9%. Over Obama’s entire two-term tenure, wages were up 4.2%.

Over President George W. Bush’s eight years in office, wages also increased by 4.2%, and under President Bill Clinton, they went up by 6.4%. (Real average weekly earnings for all private sector employees, including supervisors, shows a similar trend, though BLS only has published statistics going back to 2006. Those figures are up 2.3% under Trump, 3.9% under Obama’s second term and 4% over his eight years in office.)

As for Sanders’ claim, it’s accurate as far as it goes.

In May 1974, inflation-adjusted average weekly earnings for rank-and-file workers were $330, and they haven’t climbed higher than that amount since. In May this year, those wages were $315.74. So, “the average American today has not seen a nickel more in real wages than he or she got 45 years ago.”

But that doesn’t mean wages have been flat over all those years in between, which could be the way some interpret that claim. Today’s workers are earning more on average than they did in many other years. Since the low point in 1996, wages are up 19.7%.

Change the starting point, and you get a new statistic.

Strain argues 45 years is too long a time period to fairly compare purchasing power. “When policymakers and opinion leaders argue that wages have been stagnant for decades, many people hear that as referring to their own wages — that is, the wages of today’s workers,” he wrote in a May 15 column for Bloomberg Opinion. “This strengthens the argument for comparing today’s wages with those of the early 1990s (or even more recently), rather than going back to the early 1970s, when many of today’s workers were just children.”

It’s “not accurate,” he told us, to say wages have been “stagnant for decades.”

Shambaugh said the “broad story” of wages being at the same level as 45 years ago is “fair.” They’ve climbed back up to that point after dropping considerably.

The growth also changes, Strain notes, if using the PCE to adjust for inflation, a measure preferred by the Federal Reserve. Or by looking at household income, which would include all income, not only that from wages.

Last fall, newspaper headlines touted this news. At the time the 12-month percentage change in nominal average hourly earnings for all workers and the rank-and-file topped 3% in August 2018 and has remained above 3% since, according to BLS. That’s the highest rate since it topped 3% in late 2008 and early 2009.

(Once adjusted for inflation, the numbers tell a different story. Real average hourly earnings hit their highest 12-month increase under Trump in February — 1.9% — but the increase was higher than that as recently as November 2015, at 2%. And it was the same or higher nearly every month that year.)

But this 3% nominal growth was significant. In recent years, as the economy recovered from the 2007-2009 Great Recession, economists have been bemoaning slower wage growth than would be expected as other measures, such as employment, improved. Mark Zandi, chief economist at Moody’s Analytics, told the Washington Post last fall: “Wage growth is definitively accelerating. Employers are now struggling to fill open positions and have no choice but to raise wages quickly.”

While we typically look at inflation-adjusted figures for comparisons, Strain and Shambaugh told us analysts will look at nominal wage growth when comparing short periods of time, such as year to year.

“Quite literally people’s paychecks are nominal,” Shambaugh said. “So is your paycheck going up or not?” The 3% was also noteworthy, he said, because the Federal Reserve has stabilized inflation expectations to about 2%. So, when the nominal growth moved above 3%, “you’re saying, hey, if we can sustain wage growth here … we’re going to have real gains.”

But 3% isn’t the fastest nominal rate “in many decades,” as Trump said. In fact, the 12-month growth topped 4% for most of 2007, 2001 and 1998. The current growth, Shambaugh said, is “still a little below … what you think a roaring economy might get you.” The growth is “good,” he said, but “not unprecedented, not historically great.”

There’s also support for the president’s claim that wages are “rising the fastest for the lowest income Americans.”

CNBC said in a March report, “For the first time during the recovery, lower-end earners are getting more of the benefit, according to a Goldman Sachs report.” And the Economic Policy Institute, a think tank that advocates for low- and middle-income earners, said in a 2019 report: “From 2017 to 2018, relatively fast growth continued at the top (2.7% at the 95th percentile), but the 20th and 30th percentiles saw the strongest growth at 4.8% and 3.7%, respectively.”

The EPI report, however, noted the sizable percentage gains at the upper percentiles over a longer period of time, such as since the Great Recession, and it found greater 2017-2018 gains among low-wage workers in states that had increased the minimum wage.

Sen. Cory Booker, meanwhile, has made a very different claim about wages. The New Jersey Democrat, who is running for president, said in an interview with PBS on April 29: “And a lot of that is because we’re at a time of corporate profits are at an 85-year high, but wages are about a 60-year low.”

Booker’s campaign didn’t respond to our requests for support for the claim, but the senator is likely referring to wages as a percentage of gross domestic income. And he’s close. Wage and salary disbursements were 43% of GDI in 2017, and while the percentage was lower from 2010 to 2016, this period is the lowest it’s been in 60-plus years. The measure was 51.6% back in 1953 and in 1970.

Shambaugh said the measure “is saying that workers are getting a smaller share of the economic pie than they used to.”

Chris Tilly, a professor of urban planning at the University of California, Los Angeles, also told us there isn’t anything wrong with looking at wages and salaries this way, but it answers a different question. It tells us what workers are getting “relative to other kinds of income recipients in the economy.”

If we want to know if wages are higher or lower than they used to be or how they’ve grown, we’d look at the inflation-adjusted figures, as we did above. It’s a reminder to voters that these talking points about wages can be more complicated than they appear, and they don’t always tell the whole story.