A quotation misattributed to Mark Twain is circulating online and suggests the famous writer disparaged voting. Actually, he celebrated it.

Robert Hirst has been tracking Mark Twain quotes for 30 years, and he keeps a list of the fake ones.

A bogus quotation that’s been circulating on Facebook recently with a picture of Twain was a new addition to his list of fakes. It says: “If voting made any difference they wouldn’t let us do it.”

Hirst is the curator of the Mark Twain Papers at the University of California, Berkeley, and when asked if that quotation was accurate, he said “absolutely not.”

Regardless, it has appeared in several different memes and is inscribed on a coffee mug available for sale on Amazon.

As one of America’s best known writers, Twain has been misidentified as the source of a lot of quotes, a phenomenon that has mushroomed on the internet.

“Half the quotes on the net attributed to Mark Twain are not Mark Twain,” Hirst said.

People hold him in high regard, so, if they have something they want to say, they’ll attribute it to Twain to add gravitas, Hirst said.

This supposed quotation, though, misrepresents Twain’s actual thoughts on voting.

In a 1905 interview in Boston, he told the press: “In this country we have one great privilege which they don’t have in other countries. When a thing gets to be absolutely unbearable the people can rise up and throw it off. That’s the finest asset we’ve got — the ballot box.”

FactCheck.org Rating:
False
A meme claims Mark Twain said: "If voting made any difference they wouldn't let us do it."
Viral meme
- 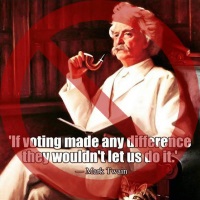