In remarks at a technology conference in Brazil, former President Barack Obama misrepresented U.S. gun laws, claiming that “anybody can buy any weapon … without much, if any, regulation,” including “machine guns.”

Machine guns have been tightly regulated since 1934 and banned since 1986, except for the sale or transfer of such a weapon that “was lawfully registered and possessed before May 19, 1986,” according to the Bureau of Alcohol, Tobacco, Firearms and Explosives. And even then it can only be transferred from one registered owner to another registered owner.

Obama made his remarks May 30 at a technology conference hosted by VTEX. During a question and answer period, the former president was asked about his “most difficult day” in office.

Obama, May 30: Well, I’ve said this before. The most difficult day that I’ve had was the day that there was a shooting in a school, where 20 small children were shot, as well as some teachers, and you know, my daughters were only a little bit older than these young children that had been shot and I had to go and comfort the parents. And some of you may be aware our gun laws in the United States don’t make much sense. Anybody can buy any weapon, any time whether or not (applause) you know, without much, if any, regulation. They can buy it over the internet. They can buy machine guns.

The former president is referring to a mass shooting at the Sandy Hook Elementary School in Newtown, Connecticut, in December 2012 that left 26 people dead, including 20 children. A month after the shooting, Obama issued a plan designed to strengthen the nation’s gun laws, but he was unsuccessful in passing any legislation — including his proposals to ban certain assault weapons and high-capacity magazines, and expand background checks for gun purchases online and at gun shows.

Unable to pass those proposals, the former president announced a series of executive actions in 2016.

So, Obama has long held the opinion that U.S. gun laws aren’t strong enough. But even under existing laws it is nearly impossible to legally buy a machine gun, which has been tightly regulated since the passage of the National Firearms Act in 1934, in response to the gangster era.

A “machinegun” is defined under existing law as a fully automatic weapon — that is, “any weapon which shoots, is designed to shoot, or can be readily restored to shoot, automatically more than one shot, without manual reloading, by a single function of the trigger.”

The 1934 law required machine-gun owners to pay a $200 tax and register their weapon with the federal government. In 1986, machine guns were banned for civilian use under the Firearm Owners’ Protection Act — although the law grandfathered such weapons that were “lawfully possessed” prior to May 19, 1986. Under that law, which remains in effect today, machine guns can be sold or transferred only if they were “lawfully registered and possessed before May 19, 1986,” according to the ATF.

As of 2007, there were “approximately 182,600 machine guns available for transfer to civilians in the United States based upon an audit of the ATF-maintained National Firearms Registry and Transfer Record (NFRTR),” according to a 2017 report on gun laws by the Congressional Research Service.

We asked Eric Schultz, a spokesman for the former president, what Obama meant when he said “anybody … can buy machine guns.”

Schultz said the Obama used the term “machine gun,” which are fully automatic weapons, when he meant semi-automatic weapons that are currently legal to purchase in the United States, such as AR-15 rifles.

“He was using ‘machine gun’ as a phrase that everybody understands, especially in a foreign country. He’s obviously not talking about Al Capone tommy guns – he was referring to semi-automatic weapons so people would understand what he’s talking about,” Schultz told us in an email.

As for Obama’s remark that “anybody can buy any weapon, any time … without much, if any, regulation,” Schultz referred us to several news articles — including a 2016 PolitiFact article that gave Obama a “mostly true” rating when he said a “violent felon can buy [a gun] over the Internet with no background check, no questions asked.”

It is illegal for a “violent felon” to purchase any firearm under existing law. The Gun Control Act of 1968 prohibits certain people from buying guns, including someone imprisoned for more than one year. Under the Brady Handgun Violence Prevention Act, federally licensed firearm dealers are required to conduct background checks and cannot sell to “prohibited persons,” such as violent felons.

In his 2016 remarks, Obama was referring to those who buy guns online from private sellers, not licensed dealers, and therefore are not required to undergo background checks. While it would be illegal for a violent felon to buy a gun, it still might be possible for them to do so through a private online sale in some states.

In this case, Obama prefaced his remarks about machine guns by saying “our gun laws in the United States don’t make much sense.” But, in fact, there is a law that bans machine guns — except those that are grandfathered in, as we noted earlier.

Obama may not draw a distinction between a semi-automatic and a fully automatic weapon, but the law does. And he misrepresented that law in his remarks before a foreign audience.

FactCheck.org Rating:
Misleading
"Anybody can buy any weapon, any time whether or not, you know, without much, if any, regulation. They can buy it over the internet. They can buy machine guns."
Barack Obama
Former U.S. President
https://news.grabien.com/story-obama-brazil-audience-some-you-are-aware-our-gun-laws-united 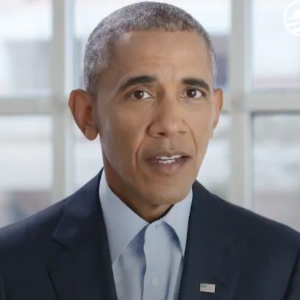