A popular meme falsely claims that each month refugees in the United States receive over three times more money in “federal assistance” than Social Security beneficiaries. That’s a new version of an old claim we debunked over a decade ago.

A bogus comparison of benefits for “illegal refugees” and Social Security recipients is stirring up anger online.

The claim, which has been shared as a meme, says: “Insanity is when illegal refugees get $3,874 a month in federal assistance while Social Security checks average $1,200 a month.”

This most recent version isn’t true, either, and it also may have borrowed from another Canadian viral claim. The figure this meme uses for refugee benefits is the same one used in what Snopes called a “mostly false” Facebook posting about benefits in Canada.

To start with, there are no “illegal refugees.” Under U.S. law, refugee status is given to those who are admitted to the country after demonstrating that they have fled persecution. The number of refugees that the U.S. takes in each year is capped by the president under the Refugee Act of 1980 — for fiscal year 2019, the cap is set at 30,000, which is the lowest it has been since 1980.

While refugees are eligible to apply for some federally funded programs, not all of them do, a spokesman at the Department of Health and Human Services’ Administration for Children and Families told us.

Also, many of the programs that refugees are eligible to apply for are temporary. Two of the primary assistance programs available to refugees are Temporary Assistance for Needy Families, or TANF, and Refugee Cash Assistance, or RCA.

The amount of money given out under each program varies widely depending on the state. For example, monthly TANF payments for a single-parent family of three ranged from $170 to $1,021 in 2017.

As for the second part of the claim in the meme — “Social Security checks average $1,200 a month” — that’s close to the correct figure. The average monthly Social Security benefit for all retired workers in 2019 is $1,461, according to the Social Security Administration.

FactCheck.org Rating:
False
"Insanity is when illegal refugees get $3,874 a month in federal assistance while Social Security checks average $1,200 a month."
Viral meme
- 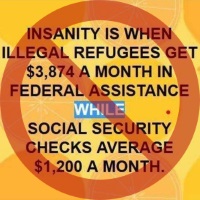