A TV ad from Democratic presidential candidate Kirsten Gillibrand accuses President Donald Trump of breaking his promise to protect and create manufacturing jobs. Despite some plant closures, there has been a net increase of nearly 500,000 manufacturing jobs on Trump’s watch.

Billed by her campaign as the first anti-Trump TV ad of the 2020 cycle, the ad comes in support of what Sen. Gillibrand is calling the “Trump Broken Promises Tour” in six cities in Pennsylvania, Ohio and Michigan on July 11 and 12 to highlight, in part, what she says are the president’s broken promises to residents there about manufacturing jobs. The campaign said it is spending five figures to air the ad on cable channels in those cities.

“He promised to end bad trade deals and bring back manufacturing jobs, and failed,” Gillibrand said on CNN on July 9.

The ad begins with a clip of Trump at a rally in Warren, Michigan, on Oct. 31, 2016, saying, “If I’m elected, you won’t lose one plant, you’ll have plants coming into this country. You’re gonna have jobs again … I promise you.”

On the screen, it then says, “Trump promised manufacturing jobs would stay but they’re not.” That claim is credited to an MSNBC segment on March 9 that carried that headline. The story is about the closing of a GM plant that manufactured the Chevy Cruze in Lordstown, Ohio. But viewers of the ad can’t tell that the claim refers specifically to Lordstown. The ad leaves the false impression that U.S. manufacturing jobs overall have declined.

The Gillibrand campaign points to other plant closings, including a Harley-Davidson plant in Kansas City, as well as GM and PPG Industries plants in Michigan.

Trump certainly has exaggerated claims about his success in reviving U.S. manufacturing. And as we have written, U.S. manufacturing is not “back,” at least it is nowhere near where it was two decades ago. The industry lost more than 6 million jobs between 1998 and 2010. But the number of manufacturing jobs has been slowly growing ever since, according to data kept by the Bureau of Labor Statistics, and on average, at a faster clip under Trump than under President Barack Obama after the recession. 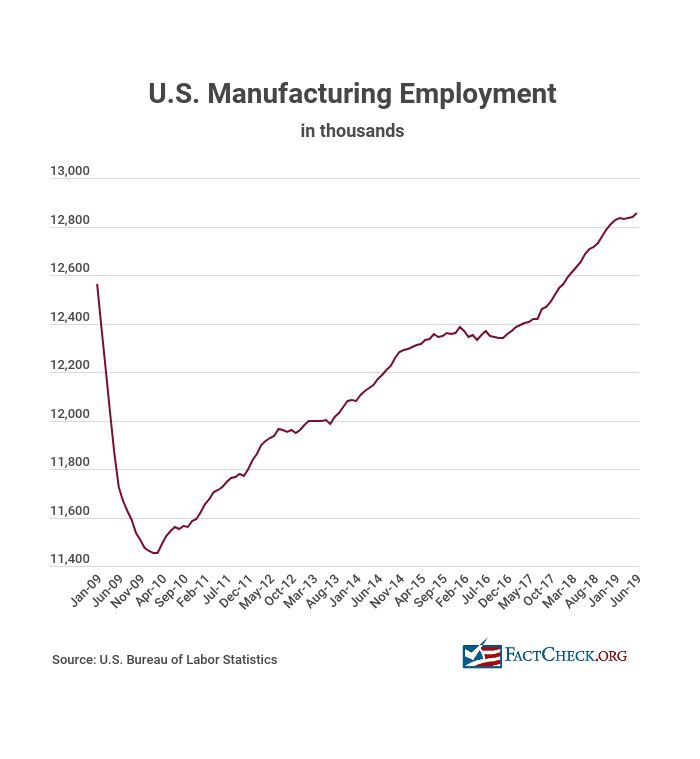 “Manufacturing has been one of the bright spots in the economy over the last couple years,” Chad Moutray, chief economist for the National Association of Manufacturers, told us in a phone interview.

Trump doesn’t get all the credit though, Moutray said. The president’s success has been due, in part, to a “coincidence of timing” in which the global economy and the energy sector improved about the time he took office. “There was a non-political element to it [the growth in manufacturing jobs since 2017],” Moutray said. But he also credits part of the rise to the tax cuts championed by Trump and the easing of regulations. That resulted in some optimism among manufacturing executives, he said.

Manufacturing job growth has slowed this year — more certainty about tariffs would help, Moutray said  — but is still positive. NAM expects 1.2 percent growth for the year, he said.

“The manufacturing sector continues to plug along,” Moutray said.

“Manufacturing job growth is clearly slowing,” Alliance for American Manufacturing President Scott Paul said in a press release on June 7. “Economic expansions don’t last forever, but there are policy interventions that can boost demand and support new factory job creation. Now would be a good time to get a $2 trillion infrastructure plan back on track, and to secure a meaningful trade deal with China to rebalance that relationship.”

The Gillibrand campaign emphasizes that there have been manufacturing job losses in some specific areas targeted by Trump during his 2016 campaign, including areas of Ohio and Michigan.

Indeed, the distribution of new manufacturing jobs has not been equal around the country. Research from the New York Federal Reserve published in February found that since the rebound in 2010, “much of the Northeast and many parts of the Midwest saw their shares of the nation’s manufacturing jobs decline, while auto alley, parts of the South, and much of the West Coast saw their shares increase.” According to the report, the “gains were especially large in ‘auto alley’—a narrow motor vehicle production corridor stretching from Michigan south to Alabama—while much of the Northeast continued to shed manufacturing jobs.”

And yet, in nearby Lordstown, Ohio, GM earlier this year began shutting down a plant, eliminating about 1,600 hourly positions. According to the New York Times, about 700 of those workers had taken positions at other GM factories as of May. GM has said that it plans to sell its Lordstown plant to Workhorse Group, an electric-vehicle start-up company, though it is unclear how many jobs could be created if the deal goes through.

As another example, the Gillibrand campaign pointed to GM earlier this year eliminating nearly 1,300 jobs at the Warren Tech Center. That’s where Trump made the speech used in the Gillibrand ad, in which he promised, “If I’m elected, you won’t lose one plant, you’ll have plants coming into this country. You’re gonna have jobs again.” However, the same Detroit News article about the elimination of jobs at the Warren Tech Center also noted that GM’s Cadillac brand would be moving to Warren. 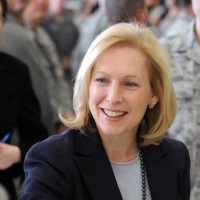