The Trump campaign apparently based the claim on data showing a significant decline in migrants caught illegally crossing the Southwest border between May and August of this year. But counting apprehensions in just that three-month period amounts to cherry-picking. Measured over a longer period of time, apprehensions under Trump are up instead of down.

The full 30-second campaign commercial — a version of which aired nationwide during the final game of the World Series — attacks Democrats for focusing on “impeachment and phony investigations” while Trump is “changing Washington” by creating millions of jobs, reducing illegal immigration, and “obliterating ISIS.”

A spokesperson did not respond when we asked the campaign how it figures Trump is “cutting illegal immigration in half,” as the ad’s narrator says.

A version of the ad that aired in Honolulu, Hawaii, on Oct. 30, and was captured by Kantar Media’s Campaign Media Analysis Group, does not mention a specific time period or include an on-screen citation. However, a version of the ad shared on Twitter by Trump’s 2020 campaign manager, Brad Parscale, uses the same language but includes a graphic that says “Fox News, 9/10/2019.”

That day, acting director of U.S. Citizenship and Immigration Services Ken Cuccinelli talked about illegal immigration on “Fox & Friends” with host Brian Kilmeade and said: “The president has literally thrown every domestic and international effort he can at this and it’s paid off. As you noted Brian, we are down more than 50% since May in just three months.”

Actually, total Southwest border apprehensions declined by nearly 62% from 132,856 in May to 50,684 in August. Still, that only counts three months of this year. Without that information, viewers of the ad could get the false impression that the TV spot is saying that Trump cut illegal immigration compared to a period before he was president. (The ad’s claims that he “created 6 million new jobs” and “500,000 new manufacturing jobs” are mostly accurate and based on employment data that counts from when Trump took office until now.)

But as we wrote in “Trump’s Numbers October 2019 Update,” since Trump entered office in January 2017, “[i]llegal border crossings nearly doubled, as of the most recent 12 months on record.” That was based on U.S. Customs and Border Protection data as of August. September data is now available from the U.S. Customs and Border Protection, which allowed us to compare fiscal years for this story — as illustrated in the chart below. (Note: There are technically no statistics for those who cross the border illegally, but apprehensions by CBP are used to measure such trends.) 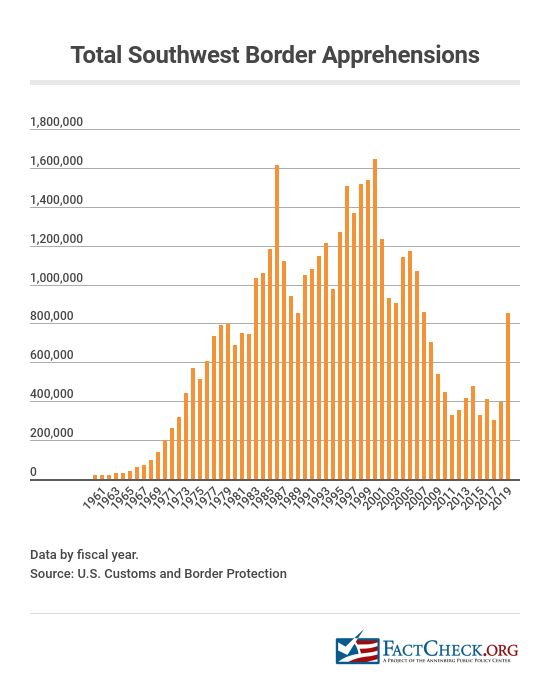 By all of those measures, border officials are catching more people at the border under Trump — not fewer.