President Donald Trump accused CNN of manipulating video to make it appear that “massive crowds” protested his decision to move the U.S. Embassy in Israel to Jerusalem. Trump called it “fake news as usual,” but we couldn’t find any CNN video that had been manipulated in the ways Trump claimed. The White House didn’t provide any evidence, either.

And while the protests at the time of the announcement of the embassy move were not as large as some expected, when the embassy actually opened in Jerusalem in May 2018, the New York Times reported that “tens of thousands of Palestinians took part” in protests in Gaza. At least 58 demonstrators were killed and more than 2,700 demonstrators were injured.

During remarks at the Israeli American Council National Summit on Dec. 7, Trump said that while presidents for two decades promised to move the U.S. Embassy to Jerusalem, “I kept my promises.” Trump said after word got out that he intended to announce the move, he was “besieged” by calls from foreign leaders trying to dissuade him — but he dodged the calls.

Trump said after he actually made the announcement, the mass violence some had warned of never materialized. But he said CNN tried to “con” viewers into thinking otherwise.

They said, “Massive crowds have gathered. Massive crowds.” And I looked, I said, “That’s a strange angle. I’ve never seen that angle.” It was like — you had a cameraman sitting on the floor pointing up. But every once in a while, you say, “There’s nobody behind the people in the front row. What’s going on?” And it was a con. It was fake news as usual.

We reached out to the White House press office for clarification about which CNN report the president was referring to, but we did not get a response.

However, the reports we found from CNN at the time of the announcement contradict the president’s anecdote. (This is not the first time that we have written about the president’s false or unsubstantiated claims of “fake news.”)

Trump announced on Dec. 6, 2017, that he would officially move the U.S. Embassy in Israel to Jerusalem. Although Palestinian groups called for “three days of rage” in protest of Trump’s announcement, mass violence did not unfold on the scale many feared.

The day after Trump’s announcement, CNN reporter Ian Lee — wearing a bulletproof vest and military helmet —  reported live from Ramallah on the West Bank about protests that had broken out at the border with Israel.

“Palestinians did call for a strike,” Lee said. “Businesses are closed. Schools are closed. And you are seeing a lot of people go out in the street and voice their anger.” Some of them, he said, were burning tires. Lee, along with what looked like a few hundred protesters, scattered as Israeli soldiers fired tear gas into the crowd to disperse it.

Wall Street Journal, Dec. 7: Battles broke out in a number of West Bank cities and near Gaza, according to Palestinian authorities, who said about 50 Palestinians were injured. Youths burned tires and threw stones at Israeli soldiers, who responded by firing tear gas and rubber bullets.

A day later, the Times of Israel reported that an “estimated 5,000 Palestinian protesters held demonstrations and clashed with Israeli security forces at some 30 locations across the West Bank and Gaza Strip on Friday [Dec. 8, 2017] after midday prayers, in a show of anger over US President Donald Trump’s declared recognition of Jerusalem as Israel’s capital.”

The New York Times on Dec. 8 said that “thousands of Palestinian protesters confronted Israeli soldiers at the Gaza border,” and “scores of protesters were said to have been wounded, many by rubber-tipped bullets.” However, the Times said that “the enormous wave of violence that had been feared after Mr. Trump’s decision to formally recognize Jerusalem as the capital of Israel did not immediately materialize.”

Several days later, on Dec. 12, CNN’s Arwa Damon again reported from the streets of Ramallah, where a couple dozen protesters could be seen hurling rocks at Israeli forces. A chyron noted that in the days following Trump’s announcement there were “dozens hurt in protests against U.S. embassy move.” But CNN did not attempt to pad the size of the crowds.

To the contrary, Damon reported that “the number of Palestinians who have taken to the streets remains, relatively speaking, low.”

“There’s sort of a back and forth,” Damon reported of the violent skirmishes between protesters and Israeli forces. “It’s pretty much the norm here. In fact, a little muted, at least by what the expectations were. … Yet that is hardly a reflection of what is happening within the population’s heart, the anger of it all.”

Later, the report included footage of a “small demonstration” that had taken place in Ramallah earlier, a peaceful march that the video makes clear included only several dozen people. The CNN video shows the camera angle at street level, but also from above looking down at the crowd. 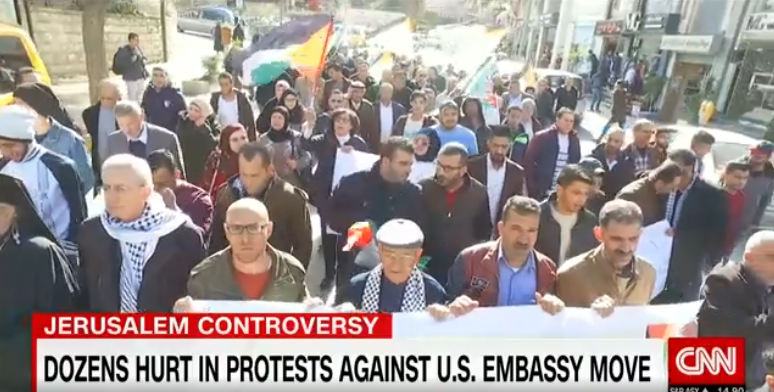 Those demonstrations, however, were dwarfed by the ones surrounding the actual opening of the embassy in Jerusalem in May 2018, many of which were marked by violence.

According to the New York Times, on the day of the embassy relocation, “tens of thousands of Palestinians” took part in protests focused on the embassy move. The protests turned bloody when demonstrators tried to cross a border fence separating Israel from Gaza, the Times reported, and Israeli soldiers fired on the protesters. Palestinian officials said at least 58 people were killed and more than 2,700 injured — at least 1,350 by gunfire.

The same day, Fox News reported: “More than 35,000 protesters amassed at a dozen locations” along the Israeli border, and 52 Palestinians were reportedly killed.

From the Israel-Gaza border, Fox News’ Benjamin Hall reported that some “had hoped that they wouldn’t come out in the numbers that they did. But they did. And in fact this is the most violent day that we’ve seen here on the border since the War of 2014.”

Speaking at the Israeli American Council National Summit, Trump also added another layer of exaggeration to an already bogus anecdote about how he balked at a $1 billion price tag for a new embassy in Jerusalem and instead renovated an existing facility for about $250,000.

The renovation is a temporary solution, and Trump’s State Department has said there was never a formal proposal for a new building.

As we wrote in our March 6, 2018, story “Trump’s Bogus Embassy Boast,” during a briefing on Feb. 26, 2018, then State Department spokeswoman Heather Nauert said: “We have not had any formal discussions or any formal proposals of the sort, and when it comes to overall cost estimates, that’s something that we’ll have to work out with Congress.”

We won’t rehash all the details except to note that in previous tellings — more than 10 times — Trump has said he was told the cost of a new embassy was estimated at $1 billion. In the version he offered at the recent summit, however, Trump repeatedly claimed that staff came to him and said “they want to spend $2 billion to build the embassy.”

We asked the White House press office for documentation of such an estimate, but we received no response.

Editor’s note: FactCheck.org collaborates with CNN’s “State of the Union” to produce online fact-checking videos, which can be viewed here.