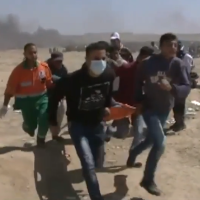 President Trump accused CNN of manipulating video to make it appear that “massive crowds” protested his decision to move the U.S. Embassy in Israel to Jerusalem. But we couldn’t find any CNN video that had been manipulated in the ways Trump claimed, and the White House didn’t provide any evidence, either. 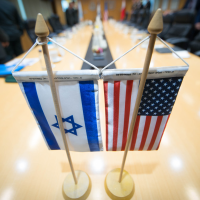 President Donald Trump often likes to boast about his ability to negotiate better deals for the government. This week, the boast was the cost of a new embassy in Jerusalem, and it was a doozy.

Vice President Joe Biden incorrectly told a pro-Israel group that President Obama’s $3.1 billion request for military aid to Israel last year was “the most in history.” The record was set in fiscal 2000, when the Clinton administration secured $3.12 billion for Israel — which is not only slightly more in nominal dollars but much more in inflation-adjusted dollars.
Biden is also taking credit for a level of spending that was set by the Bush administration as part of a 10-year,

Mitt Romney says he “did not speak about the Palestinian culture” at a fundraiser in Israel, where his remarks were denounced by a Palestinian leader as “racist.” It’s true that Romney didn’t directly disparage the Palestinian culture, but he did say “culture makes all the difference” when explaining why Israel’s per-capita gross domestic product is more than double that of neighboring areas managed by the Palestinian Authority. Palestinians say that ignores the effect of Israel’s economic sanctions.

Rick Perry created an international controversy when he claimed, with no basis in fact, that Turkey “is being ruled by what many would perceive to be Islamic terrorists.” That may be his opinion, but the fact is that the Republic of Turkey is a U.S. ally and a secular democracy ruled by elected leaders. It is not on the State Department’s list of “state-sponsors of terrorism,” and its leaders have not been implicated in any acts of terrorism.

GOP presidential candidates Michele Bachmann and Mitt Romney claim that the U.S. ambassador to Belgium “justified” and “downplayed” anti-Semitism and blamed it on “Israel’s actions toward the Palestinians.” We find that to be a one-sided interpretation of what was actually said.
Others may view Ambassador Howard Gutman’s remarks differently than the Republican candidates when seen in full context. Gutman — who is Jewish and whose father survived the Holocaust — said, for example, that the “hatred”

Nine Republican presidential candidates debated for two hours in Orlando, Fla., and they served up more exaggerations and falsehoods — about Obama, each other, and even Thomas Jefferson. Perry claimed Romney supports Obama’s Race to the Top education initiative. In fact …

Kerry’s “strategy to win the war on terror” is puffery; Bush’s response is much ado about ten words.