A viral Facebook post falsely claims that House Speaker Nancy Pelosi “wouldn’t release 8.5 billion for Coronavirus without abortion funding.” A House bill providing $8.3 billion in relief was already signed into law. The “abortion funding” claim is a distortion of a separate debate over a different bill.

A behind-the-scenes skirmish between Republicans and Democrats over language in a House bill providing relief amid the novel coronavirus pandemic recently prompted claims by both sides that the measure was being politicized. Specifically, news reports cited an apparent debate over whether the bill could open the door to federal funds being used for abortions.

Ultimately, though, the House passed the bill — the Families First Coronavirus Response Act — on March 14, and most Republicans voted in favor. The Republican-led Senate then approved it on March 18 and President Donald Trump signed it. There is nothing in the bill specific to the issue of abortion and, in fact, language was added to make clear that additional funding would be subject to restrictions in existing spending laws.

But some on social media have distorted the facts, claiming that “Nancy Pelosi wouldn’t release 8.5 billion for Coronavirus without abortion funding, so Trump went around her to declare a National Emergency and got 50 billion.” 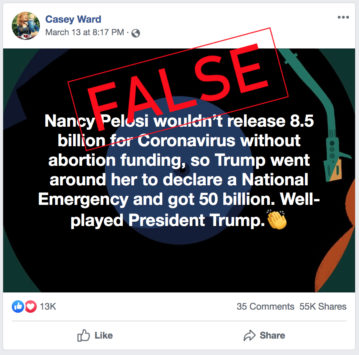 For starters, the “8.5 billion” refers to a different bill — the Coronavirus Preparedness and Response Supplemental Appropriations Act — that the Democrat-controlled House passed on March 4. It provides $8.3 billion for federal agencies to respond to the outbreak (which was more than the $2.5 billion originally requested by the White House). The Republican-led Senate approved the measure the next day, and President Donald Trump signed it into law on March 6, days before the post appeared on Facebook.

So it’s false to say Pelosi refused to “release 8.5 billion for Coronavirus.” And Trump’s declaration of a national emergency over COVID-19 came days after that money was approved, on March 13. It provides access to more than $42 billion for states and localities — and is in addition to the $8.3 billion.

The Facebook claim instead refers to reports of a conflict over language in the Families First Coronavirus Response Act. That legislation, projected to cost more than $100 billion, provides free coronavirus testing, including for the uninsured (it does not cover treatment relating to the coronavirus) and mandates paid sick leave by some employers (though there are loopholes), among other provisions.

The abortion issue surfaced in a story on the conservative website the Daily Caller, which cited anonymous White House officials and claimed that “Pelosi sought to include a potential way to guarantee federal funding for abortion into the coronavirus economic stimulus plan.” More specifically, it said Pelosi wanted to spend “$1 billion to reimburse laboratory claims, which White House officials say would set a precedent of health spending without protections outlined in the Hyde Amendment.”

Republican Sen. Ben Sasse also issued a statement claiming that Pelosi was “politicizing emergency funding by fighting against the bipartisan Hyde Amendment.” The Hyde Amendment is reauthorized annually as an attachment to the appropriations bill for the Department of Health and Human Services to prevent funds from Medicaid and federal health care programs from being used for abortions, except in cases of rape or incest, or when the life of the woman would be endangered.

The issue was characterized differently by the other side of the debate.

Democratic Rep. Alexandria Ocasio Cortez, for example, claimed Republicans were trying to put “pro-life provisions” into the bill. (Note: Quote is at 5:25 in the video.)

A House Democratic aide told us the conflict arose because the original version of the bill outlined the funding for laboratory tests as mandatory spending, rather than discretionary spending, and did not tie it to specific agencies, whose appropriations are subject to Hyde Amendment provisions.

That squares with what Republican Rep. Kevin Brady’s deputy chief of staff, Jeff Billman, told us.

Billman said in an email that “an earlier iteration of the bill provided $1 billion to a program that did not contain Hyde protections,” but said changes were made to provide the funding through a HHS office “covered by the Hyde Amendment contained in the Labor HHS (LHHS) appropriations bill.”

There was evidently a disagreement over the significance of the issue, though.

The House Democratic aide we spoke with, on the other hand, said there was no back-door effort to fund abortions through the bill; the aide cast doubt on the idea that it would have set a precedent of health care spending without Hyde. Pelosi’s office declined to comment.

Either way, Pelosi was not holding up the release of “8.5 billion for Coronavirus without abortion funding,” as the Facebook posts claim.

Trump, Donald (@realDonaldTrump). “I fully support H.R. 6201: Families First CoronaVirus Response Act, which will be voted on in the House this evening. This Bill will follow my direction for free CoronaVirus tests, and paid sick leave for our impacted American workers. I have directed….” Twitter. 13 Mar 2020.