Facebook and Instagram users are sharing a fake tweet attributed to President Donald Trump that suggests the president’s critics won’t get direct government payments to ease the financial burden of the coronavirus pandemic.

As the White House and Congress work on a massive stimulus package to address the novel coronavirus pandemic — which could result in payments to individual taxpayers — social media users are spreading a fabricated tweet attributed to President Donald Trump that suggests such aid could be withheld from his critics.

“Yes, I ordered the Treasury Secretary to send checks to Americans!” the fake post reads. “First however, we will go through your social media history from the last 4 years and search for any post with #NotMyPresident in it. I wouldn’t think of offending you with a check if I’m not your president! #MAGA.”

A quick search on Trump’s Twitter feed shows no trace of that tweet, which is dated March 17 at 4:13 p.m. We also couldn’t find it in the Trump Twitter Archive, which collects the president’s tweets — including those that have been deleted. The archive shows nearly 50 posts that day on Trump’s account, most of which were re-tweets. 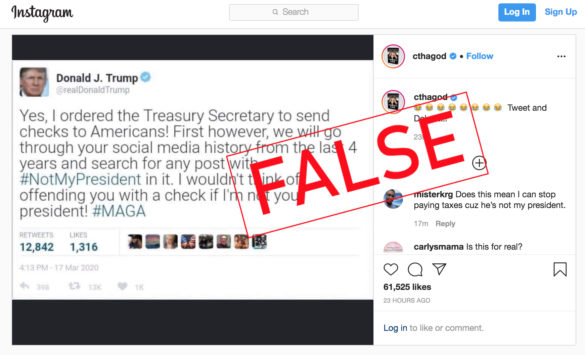 The fictitious tweet may be intended as a joke meant to needle Trump’s critics, but if so, comments show that was not clear to everyone who encountered it.

One post of the doctored screenshot was shared on Instagram by the well-followed radio host Charlamagne Tha God and was liked by more than 61,000 users.

Among the comments on the post, one user said: “This man’s level of petty is absurd.” Another wrote: “Does this mean I can stop paying taxes cuz he’s not my president.”

It’s worth noting that the payments are part of a package to assist Americans and stabilize the U.S. economy that is still being worked out by the administration and legislators; it is not the president’s decision unilaterally. The $1 trillion proposal drafted by the White House calls for $500 billion for such payments.

Treasury Secretary Steven Mnuchin said on March 19 that payments could amount to $1,000 per adult and $500 per child — meaning a family of four could receive $3,000 — and could be issued in the coming weeks, if the necessary legislation passes.

“Mnuchin on the Fed and Trump’s efforts to protect the US economy.” Fox Business. YouTube. 19 Mar 2020.