A photo taken at a Black Lives Matter protest in June is now being shared on social media, including by President Donald Trump, with the false claim that it shows a recent rally in Seattle to “demand mail-in voting.”

President Donald Trump shared a tweet on Aug. 17 falsely claiming that a photo of a sea of protesters shows “thousands of Seattle Democrats” gathered “to demand mail-in voting because it’s too dangerous to vote in-person.”

The tweet shared by the president was posted the day before on an account called “Walter Cronkite,” a reference to the late broadcast journalist known for his credibility and reliability. The account’s biography includes the hashtag “#fakenews.”

Facebook posts also amplified the falsehood, gaining thousands of shares in a number of hours.

The photo was indeed taken in Seattle — but it actually shows a Black Lives Matter protest from early June. 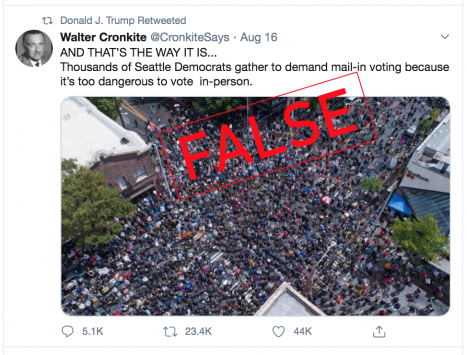 A reverse image search of the picture brought us to a post on the website westseattleblog.com. The June 6 post identified the photo as a protest in West Seattle and credited the image to Paul Weatherman.

Weatherman, who identifies on Twitter as a Seattle-based aerial photographer, posted the image and others the same day on Twitter.

So the image doesn’t show a protest “to demand mail-in voting.”

Mail-in voting is nothing new for Washington, which is one of five states that already conducts “all-mail elections,” according to the National Conference of State Legislatures.

Another 29 states and Washington, D.C., have “no excuse” absentee or mail-in voting, according to NCSL, meaning anyone can choose to vote by mail without specifying a reason. And about a quarter of ballots cast in the 2018 general elections nationwide were by mail, as we’ve explained before.

But amid a push for mail-in voting in response to the COVID-19 pandemic, there are concerns that Trump’s opposition to additional funding for the cash-strapped U.S. Postal Service and operational changes made by the new postmaster general, Louis DeJoy, would prevent the Postal Service from handling the increase in mail-in ballots.

On Aug. 18, the postmaster general announced that he would be “suspending” such “operational initiatives” until after the election is concluded — “[t]o avoid even the appearance of any impact on election mail.”

There have been some protests in recent days targeted at DeJoy, including in North Carolina and Washington, D.C.

Trump and his reelection campaign have attempted to undermine the process of mail-in voting — drawing false distinctions between mail-in and absentee ballots, for example, and advancing the specter of potential fraud by using faulty premises.