The majority of United States residents who have not been vaccinated against COVID-19 are white, according to available state data and survey research. That contradicts Texas Lt. Gov. Dan Patrick’s claim that, “in most states,” Black residents are “the biggest group” of unvaccinated people.

The Kaiser Family Foundation, a nonpartisan, health-issues organization, reported that across 40 states with comparable data as of Aug. 16, the percentage of people who had received at least one dose of a COVID-19 vaccine was 50% for whites, 45% for Hispanics and 40% for Blacks. Because Blacks (41.1 million) and Hispanics (62.1 million) make up a much smaller portion of the overall U.S. population than whites (204.3 million), those percentages indicate that, in raw numbers, far more white people remain unvaccinated against the disease.

But Patrick, in an Aug. 19 appearance on Fox News’ “The Ingraham Angle,” falsely implied that it was unvaccinated Black people who are responsible for the resurgence of the coronavirus in his state and around the rest of the country.

The show’s host, Laura Ingraham, asked him to respond to critics who fault the policies of Republican Gov. Greg Abbott’s administration for the recent increase in COVID-19 cases, hospitalizations and deaths in Texas. In response, Patrick said “Democrats like to blame Republicans on that,” a reference to those who have cited polling data showing that as many as nearly half of Republican adults say they have not been vaccinated.

He then added: “Well, the biggest group in most states are African Americans who have not been vaccinated. The last time I checked, over 90% of them vote for Democrats in their major cities and major counties.”

However, there is no support for the claim that Black people are the “biggest group” of people who have yet to get a shot.

Besides the KFF analysis of state data, a KFF poll of individuals conducted between July 15 and July 27 found that among unvaccinated adults, 57% were white, 20% were Hispanic and 13% were Black.

“While White adults account for the largest share (57%) of unvaccinated adults, Black and Hispanic people remain less likely than their White counterparts to have received a vaccine, leaving them at increased risk, particularly as the variant spreads,” KFF said in an Aug. 18 issue brief. 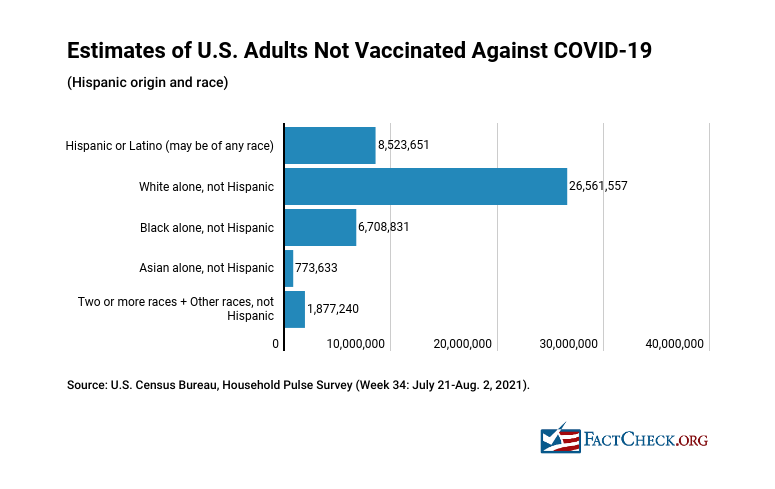 In defense of his claim, Patrick posted a statement to his Facebook and Twitter accounts that revealed that he conflated vaccination rates with the number of unvaccinated people.

“Last night on Laura Ingraham I was asked about Democrat attacks on Texas’ COVID-19 response,” the statement reads. “I shared with her information recently reported in both the Houston Chronicle and Texas Tribune, as well as on the Texas Department of State Health Services website. Not surprisingly, Democrat social media trolls were up late misstating the facts and fanning the flames of their lies.”

“Federal and State data clearly indicate that Black vaccination rates are significantly lower than White or Hispanic rates,” the statement continued. “Democrats continue to play politics with peoples’ lives, pandering to rather than serving certain constituencies. Republican leadership will continue to encourage vaccination without mandates in all populations.”

While Patrick said he had been referring to reporting from the Houston Chronicle and the Texas Tribune in his response to Ingraham’s question, both publications recently said that his claims on the show, as it relates to Texas, are false.

The newspapers noted that the COVID-19 vaccination rate among Black Texans  — who make up about 13% of the state’s population — is indeed lower than that of other races in the state. However, based on the total number of people, most of the remaining unvaccinated residents who are eligible to be immunized in Texas are white or Hispanic, the newspapers wrote in separate articles about what Patrick said in the Fox News interview.

“There are an estimated 5.6 million white people who are eligible and unvaccinated, while the same figure is 1.9 million for Black people, who make up a far smaller part of the overall population,” the Texas Tribune said in its Aug. 20 article. “The figure is 4.9 million for Hispanic people, whose population is now nearly as large as the non-Hispanic white population in Texas.”

As for Patrick’s suggestion that Black people are driving cases up in Texas, it was Hispanic and white residents who accounted for 37% and 32% of the state’s 99,989 confirmed cases of COVID-19 during the week of Aug. 20, according to the Texas Department of State Health Services. Black residents made up nearly 15% of the cases and in 14% of the cases the race of the person was unknown.

Editor’s note: SciCheck’s COVID-19/Vaccination Project is made possible by a grant from the Robert Wood Johnson Foundation. The foundation has no control over FactCheck.org’s editorial decisions, and the views expressed in our articles do not necessarily reflect the views of the foundation. The goal of the project is to increase exposure to accurate information about COVID-19 and vaccines, while decreasing the impact of misinformation.