The role of parents in deciding school curriculum is a flash point in the Virginia gubernatorial race. Days before the election, bogus signs have appeared on streets and in social media posts reading, “Keep Parents Out of Classrooms,” and imply they were placed by Democratic candidate Terry McAuliffe. But McAuliffe and the local Democrats said, “these signs are not ours.”

A focal point in the close race for governor of Virginia between Democrat Terry McAuliffe and Republican Glenn Youngkin is who controls what is taught in schools.

On Oct. 25, Youngkin released an ad criticizing McAuliffe for his stance on parental oversight of school curriculum. The ad featured a mother who pushed to have the 1987 novel “Beloved” by Toni Morrison banned from her son’s high school English curriculum, claiming the book gave him nightmares. The woman in the ad, Laura Murphy, is a Republican activist, and her son briefly interned for former President Donald Trump.

McAuliffe’s responded to the ad by accusing Youngkin of “book-banning,” while his campaign handed out copies of Morrison’s book with a bookmark that read, “Glenn Youngkin will ban books in Virginia schools.” 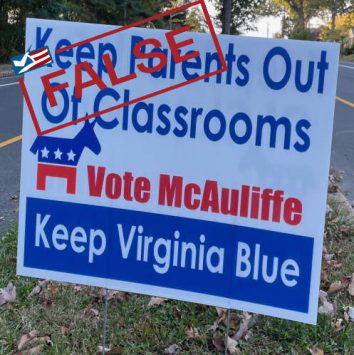 Now, just days before the Nov. 2 election, campaign signs have appeared in Arlington, Virginia, and been shared on social media, suggesting the sign is from McAuliffe’s campaign.

Another Facebook page, “Californians for TRUMP – Original,” posted a photo of the sign with the caption, “Amazing- this is what democrats want- Free Brainwash of our Kids. ”

The Gateway Pundit — a right-leaning website that repeatedly spreads misinformation — posted an article with the headline, “Pure Marxism: McAuliffe Supporters Are Posting Signs Promising to ‘Keep Parents Out of Classrooms’ as Campaign Winds Down.”

Youngkin’s team tweeted a photo of the sign, and Texas Sen. Ted Cruz retweeted the photo with a facepalm emoji.

“These signs are not ours,” Bonder said. “They were not sanctioned or distributed by ‘Terry for Virginia’ or the Democratic Party of Virginia.”

A spokesperson for the McAuliffe campaign, Christina Freundlich, told PolitiFact, “This is not a sign distributed by us. It’s not our sign.”

It’s not clear where the signs originated or who put them up. There are no organizations identified on the signs.

During the second and final gubernatorial debate on Sept. 28, McAuliffe said he wasn’t “going to let parents come into schools and actually take books out and make their own decision.”

“I don’t think parents should be telling schools what they should teach,” he said.

Youngkin tweeted a video showing a portion of the debate with McAuliffe, and wrote, “I believe parents should be in charge of their kids’ education.”

Polling shows the race is a toss-up just days before the election. Experts say voter turnout will decide the race and the outcome could signal which party will win control of Congress in the midterm elections next year.

Bailey, Phillip and David Jackson. “McAuliffe and Youngkin are in a dead heat with one week to Virginia governor election, poll shows.” USA Today. 26 Oct 2021.

Glenn Youngkin. (@GlennYoungkin). “What’s it like to have Terry McAuliffe block you from having a say in your child’s education? This mom knows – she lived through it. Watch her powerful story. #VAgov.”  Twitter, 25 Oct 2021.

Jones, Brea. “U.S. Is Sending Aid to Independent Groups in Afghanistan, Not the Taliban.” FactCheck.org. 20 Oct 2021.

“Terry McAuliffe: ‘I Don’t Think Parents Should Be Telling Schools What They Should Teach.’” Video. C-SPAN. 28 Sep 2021.