“Bernie Gores” was not killed in Afghanistan in August, and he wasn’t the “first American casualty of the Ukraine crisis.” He doesn’t exist. But Facebook users were faked out by fabricated tweets that purport to show CNN announcing the death of the same man twice in six months. The photo of “Gores” used in both fake tweets is video gamer Jordie Jordan.

On Feb. 23, a bogus tweet from an account masquerading as CNN falsely announced the “first American casualty of the Ukraine crisis.”

The tweet — from the unverified, now suspended account @CNNUKR — said, in part: “Thoughts and prayers with the family of activist Bernie Gores who passed away this morning after a mine planted by Russian backed separatists exploded.”

It was similar to another bogus CNN tweet posted in August when the Taliban seized control of Afghanistan. In that case, the unverified, since suspended account @CNNAfghan said in an Aug. 16, 2021, tweet: “#CNN Journalist ‘Bernie Gores’ executed in #Kabul by #Taliban soldiers.”

In both cases, the tweets included an image of the same smiling man.

It didn’t take long before Facebook posts began to circulate showing the tweets side by side, along with allegations that CNN is lying and an “enemy of the people.” 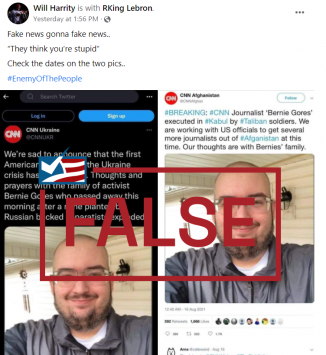 “See how CNN Blantantly LIES to the public!!” one Facebook post said. “The LEFT post is from August 2021 – the RIGHT post is from February 2022 – Using the man as a fatlity 2x !! Lmao The media in this country is a frikkin JOKE the world laughs at us! PAY ATTENTION!!!!!”

Another post said, “Wow!! The same person that was “executed” by the Taliban in Afghanistan-Is also the FiRST American casualty in the “Ukraine Crisis.” See how that works? CNN is the enemy of the people. Why lie? Go ahead and look at ALL the fact check sites saying these tweets never came from CNN, I found the original tweets FROM CNN and captured them.”

But the original tweets are not from CNN and the photo is not “Bernie Gores.”

The tweets, as we said, were from unverified accounts that have been suspended by Twitter.

Reuters wrote in August that CNN confirmed that the first tweet was false. Matt Dornic, a CNN spokesperson, told Reuters at the time: “This is a fabricated story and a fake post.”

Reuters also found that the image in the August tweet is actually YouTube gamer and podcaster Jordie Jordan. The Feb. 23 tweet featured the same photo, and we used a reverse image search tool called TinEye to confirm that it is Jordan — not anyone named “Gores.” The photo of Jordan used in the tweets can be found on Wikitubia, a Wikipedia-type page for YouTubers, and predates the tweets about the death of “Gores” by many months.

That same image of Jordan circulated on Instagram after the Aug. 4, 2020, explosion in Beirut that killed more than 200 people. In that case, the Instagram user suggested it was a photo of “Bernie Gores in Beirut at time of explosion.” A Twitter user identified Jordan, known by video gamers as WingsOfRedemption, in an Aug. 5, 2020, tweet that included the hashtag #trolls.

@CNNUKR. “We’re sad to announce that the first American casualty of the Ukraine crisis has taken place. Thoughts and prayers with the family of activist Bernie Gores who passed away this morning after a mine planted by Russian backed separatists exploded.” Twitter. 23 Feb 2022.

@CNNAfghan. “#CNN Journalist ‘Bernie Gores’ executed in #Kabul by #Taliban soldiers. We are working with US officials to get several more journalists out of #Afganistan at this time. Our thoughts are with Bernies’ family.” Twitter. 16 Aug 2021.

Homsi, Nada. “A Year After The Beirut Explosion, Victims’ Families Continue To Push For Justice.” 4 Aug 2021.

@sponsormeplz. “I can’t stop laughing. Someone sent a photo of WingsOfRedemption to an Instagram page with 60k followers dedicated to posting photos of missing Beirut explosion victims… and they said his name was BERNIE GORES #wingsofredemption #Beirut #trolls” Twitter. 5 Aug 2020.