More than 100 people were arrested during the Freedom Convoy protests in Ottawa. But a video on social media falsely claimed protesters were released “in the middle of nowhere” because the arrests were “illegal.” An associate professor of law who observed the protests said that “police had the authority to arrest and charge everyone in the illegal gathering.”

For four weeks in Ottawa, Ontario, the so-called Freedom Convoy, involving hundreds of trucks and passenger vehicles, held a series of protests against Canada’s COVID-19 vaccine mandates and restrictions.

Participants in the convoy, which departed Kingston, Ontario, on Jan. 22 before arriving in Ottawa for planned demonstrations on the weekend of Jan. 29, blocked access to streets in Canada’s capital.

On Feb. 14, in response to the protests, Prime Minister Justin Trudeau invoked Canada’s Emergencies Act, a federal statute established in 1988 but never used before. The act authorizes “the taking of special temporary measures to ensure safety and security during national emergencies.”

Trudeau said the “measures will be time-limited, geographically targeted and proportionate to the threats they are meant to address.”

The Emergencies Act “allows for a prohibition of assemblies where there might be a reasonable expectation of a breach of the peace, or a prohibition on being in certain areas,” explained Canadian lawyer Lyle Skinner in an interview with TVO.org.

Two days after Trudeau activated the Emergencies Act, Steve Bell, the interim chief of the Ottawa Police Service, issued a statement saying, “We will be focused on public safety, demonstrator safety and officer safety. All of our plans and actions will be lawful and in line with the [Canadian Charter of Rights and Freedoms]. Demonstrators must leave the unlawful protest site. Officers are already going truck to truck to advise them of this demand.” Some of the protesters were later arrested.

But in a video posted Feb. 21 on Facebook, Chris Saccoccia, who also calls himself Chris Sky and is a Canadian conspiracy theorist and COVID-19 vaccine opponent who had been arrested for a similar protest in November, claimed that the arrests in Ottawa were “illegal.”

“They’re saying how they arrested over 70 people today in Ottawa. Well, I know people on the ground whose immediate family was one of those people that got arrested and as I keep telling you these arrests are illegal, unlawful. They can’t charge you. They can’t do anything with you,” Saccoccia said in the one-minute recording.

“So you know what they are doing to these people,” Saccoccia continued. “They are arresting them in front of everybody, handcuffing them, throwing them in a paddy wagon, driving them about 15 to 20 minutes away, and then just releasing them in the middle of nowhere. Why? Because they can’t charge a peaceful protester with a crime for standing in a public area.”

But contrary to Saccoccia’s claims in the video, individuals participating in the protest were arrested, taken into custody and charged, not “released in the middle of nowhere.”

Charges of Mischief and Disobeying a Court Order

On Feb. 19, the Ottawa Police Service tweeted that it had arrested protesters wearing body armor with “smoke grenades on them and miscellaneous fireworks in their bags.” The next day the police issued a warning, tweeting that anyone found in the protest zone would be arrested.

Ottawa Police Service reports from Feb. 18 to 21 list several individuals arrested for the protest and the charges against them.

The reports include arrest information for leaders and organizers of the protest, including Tyson George Billings, Christopher John Barber, Patrick James King and Tamara Lich.

On Feb. 20, Bell said during an Ottawa Police Service press conference that 191 people were arrested, 107 were charged with a crime, and a total of 389 criminal charges were filed — including obstructing police, disobeying a court order, assault, mischief, possessing a weapon and assaulting a police officer.

The Ottawa Police Service tweeted that the main charges were mischief and obstruction, adding, “89 of [the individuals arrested] have been released with conditions” that they could not enter certain parts of the city, and “others have been released unconditionally.”

Joao Velloso, an associate professor in the faculty of law at the University of Ottawa, was on the ground to observe the protests. He told FactCheck.org in an email that it was likely “some individuals were charged, others not and some among these may be charged in the near future.”

So, while some protesters were arrested and released without charge, it’s possible those individuals could face charges later.

By Feb. 21, the day after the press conference, the number of people charged with a crime increased to 122, with the total number of criminal charges filed rising to 393. 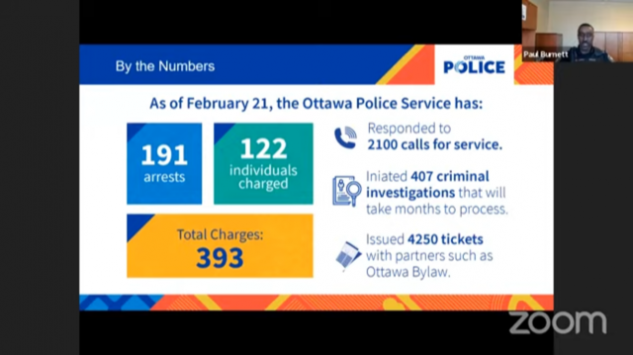 Chris Harkins, the regional commanding officer of the Ontario Provincial Police, noted at the Feb. 20 police press conference that the Ontario Emergency Management and Civil Protection Act — which was used to declare a state of emergency in Ontario — gave police the ability to take “additional action against those participating in unlawful assemblies” in Ottawa and anywhere across the province.

The Emergencies Act, in addition to its power to prohibit assemblies in certain circumstances, was used to order and compel companies to provide services in cooperation with local officials. The act allowed authorities to seize and tow vehicles, both passenger vehicles and commercial trucks. The act also allowed officials to cut off financial funding by freezing accounts connected to the protests — 206 financial accounts including a payment processor account worth $3.8 million.

Some Protesters Still in Custody

The release of protest leaders and organizers varied by case.

Lich, who was believed to be the individual who organized the GoFundMe account for the protest, was denied bail on Feb. 22 on the suspicion that she would commit another offense.

Barber was released on bond the day after his arrest, with the condition that he leave Ottawa within 24 hours after being released.

King remained in police custody as of Feb. 25. We couldn’t find an update on Billings.

Despite Saccoccia’s false claim that the arrests were “illegal,” Velloso told us that the Ottawa Police Service was “extremely cautious” and provided notices to protesters for at least a week before making the first arrests.

“I am not aware of any illegal arrests,” he said. “Overall the Ottawa Police (OPS) was extremely cautious on the arrests, providing notice for at least a week before the first arrests. … The police had the authority to arrest and charge everyone in the illegal gathering or in the secured area, but they simply decided not to arrest nor charge everybody.”

The Ottawa protests received international attention, with individuals in the U.S sending money to protesters and copycat protests popping up in other countries, including the U.S.

The Ottawa city manager estimated the protests there will cost the city about $30 million for policing and other expenses.

“Guide to the Canadian Charter of Rights and Freedoms.” Government of Canada. Accessed 22 Feb 2022.

Ottawa Police (@OttawaPolice). “Police arrested protesters wearing body armor, they had smoke grenades on them and miscellaneous fireworks in their bags. Additional smoke grenades and fireworks were located and seized in a vehicle on Wellington.” Twitter. 19 Feb 2022.

Ottawa Police (@OttawaPolice). “Of those arrested, 103 were charged. The main charges are mischief and obstruct. 89 of them have been released with conditions that include a boundary they are not allowed to attend. The others have been released unconditionally.” Twitter. 20 Feb 2022.

Trudeau, Justin (@JustinTrudeau). “The scope of these measures will be time-limited, geographically-targeted, and proportionate to the threats they are meant to address. The Act will be used to strengthen and support law enforcement agencies, at all levels, wherever needed across the country.” Twitter. 14 Feb 2022.

Velloso, Joao. Associate professor at the Faculty of Law (Common Law) of the University of Ottawa. Email to FactCheck.org. 24 Feb 2022.