FTX, which had been one of the largest cryptocurrency exchanges in the world, filed for bankruptcy on Nov. 11 after a deal fell through for it to be acquired by a larger rival and its customers scrambled to withdraw their money.

The exchange had been lending customer deposits to the hedge fund owned by its then-CEO, Sam Bankman-Fried, which is at least part of the reason why there wasn’t enough money available to repay all of FTX’s customers, Bankman-Fried said in an interview following the bankruptcy.

Russian state media and some high-profile U.S. conservatives have made the company’s downfall political, though, pushing a conspiracy theory that involves money laundering through Ukraine.

The Gateway Pundit, a conservative website that has a history of spreading misinformation and conspiracy theories, posted a story on Nov. 12 claiming that “Tens of Billions of US Dollars Were Transferred to Ukraine and then Using FTX Crypto Currency the Funds Were Laundered Back to Democrats in US.”

The following day, the state-owned Russian news outlet RT picked up on that claim and posted a story repeating it.

And, the day after that, Fox News commentator Jesse Watters made the claim, telling his roughly 2.7 million viewers that Ukraine had used U.S. aid money and “invested” in FTX, speculating that it may be part of a “money laundering” scheme to benefit the Democratic Party. Watters included a graphic that depicted a circular flow of money that started and ended with President Joe Biden.

The same evening that Watters’ show aired, former President Donald Trump amplified essentially the same graphic on his social media platform, Truth Social, where he has 4.6 million followers. Other conservative commentators, such as Terrence K. Williams, have also shared it. 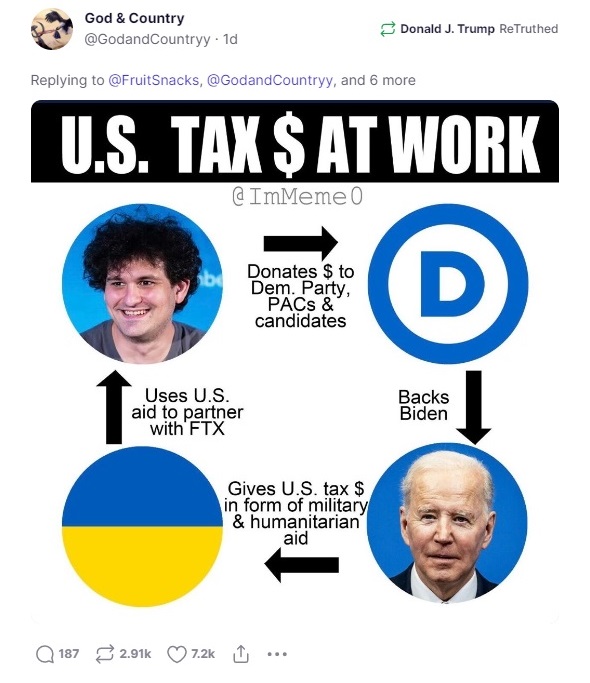 Since that graphic represents the most widespread version of the claim, that’s what we’ll address.

The image Trump promoted is shown at right — it claims that President Joe Biden had given “U.S. tax $” to Ukraine; Ukraine had used that money in a deal with FTX; FTX’s then-CEO had donated it to the Democratic Party and political action committees; and the Democratic Party had backed Biden.

We’ll start at the beginning — with U.S. aid to Ukraine.

Since Russia invaded and annexed Crimea in 2014, the U.S. has sent more than $20 billion in security assistance aid to Ukraine, according to a Congressional Research Service report published in October. Most of that total amount has been sent since Russia’s more recent invasion of Ukraine on Feb. 24. That aid has been in the form of equipment and training, according to an overview from the Department of Defense.

The U.S. has also authorized billions more in humanitarian and financial aid and is the largest contributor of total aid, globally.

While the graphic acknowledges that the assistance was “in the form of military & humanitarian aid,” it doesn’t explain how Ukraine would funnel the monetary value of the aid to FTX.

Mark Cancian, senior adviser at the Center for Strategic and International Studies, told PolitiFact that “most of the (U.S.) aid goes through third parties and not directly to the Ukrainian government.”

He said, “Much of the humanitarian assistance goes to relief organizations. Purchases of military supplies for Ukraine go to the contractor.”

A State Department spokesperson told us in an emailed statement on Nov. 19 that military assistance is not provided in cash and direct budget support couldn’t be funneled out of the country the way the theory claims.

“The direct budget support that the United States is providing to the Government of Ukraine is transmitted via a World Bank mechanism to Ukraine’s Ministry of Finance,” the statement said. “There are agreements and monitoring mechanisms in place to ensure that U.S. funds are used for verified GOU expenses; the types of expenses for which U.S. funds can be used are specifically enumerated in those agreements.”

That’s the biggest problem with this theory — there’s nothing to suggest that large sums of money moved from Ukraine to FTX. Ukraine hadn’t “invested” with FTX, as Watters claimed, and the country didn’t give U.S. aid money to the company or its former CEO, as the image claims.

Rather, Ukraine had created a website to accept donations in cryptocurrency that would benefit its war effort, and it used three companies to route the donations and turn them into usable assets — Everstake, Kuna and FTX.

So, FTX was helping make crypto donations available to Ukraine; it wasn’t taking any assets from Ukraine. This was actually explained in the article from March that Watters flashed on screen to show viewers that there was a connection between FTX and Ukraine, but he wrongly claimed that the country had “invested” in the company rather than explaining what the article actually said.

Similarly, the article that the Gateway Pundit cited as evidence to support the claim that “The Democrats sent tens of billions to Ukraine and then laundered this money back to Democrat pockets and funds in the US” said nothing of the sort. It, too, explained that FTX had agreed to help route charitable contributions for Ukraine.

Alex Bornyakov, deputy minister of digital transformation of Ukraine on IT industry development, responded to the claim on Twitter, saying, “A fundraising crypto foundation @_AidForUkraine used @FTX_Official to convert crypto donations into fiat in March. Ukraine’s gov never invested any funds into FTX. The whole narrative that Ukraine allegedly invested in FTX, who donated money to Democrats is nonsense, frankly.”

So, there’s no evidence to support the claim that Ukraine invested in or gave money to FTX.

Conspiracy theories often exploit a grain of truth — in this case, that comes in the third part of the graphic. Bankman-Fried donated nearly $40 million to political candidates and committees in the midterm election cycle. The vast majority of those donations benefited Democrats.

It’s unclear where, exactly, Bankman-Fried’s money came from, but the bankruptcy process and potential criminal investigations are likely to untangle the finances.

But, importantly, there’s no evidence to suggest that any of that money came from U.S. aid that had been laundered through Ukraine.

Update, Nov. 21: We received a statement from the State Department and updated this story accordingly.

“We charge that Bankman-Fried violated federal campaign finance laws by causing tens of millions of dollars in illegal campaign contributions to be made to candidates and committees associated with both Democrats and Republicans,” Williams said. “These contributions were disguised to look like they were coming from wealthy co-conspirators when in fact, the contributions were funded by [Bankman-Fried’s hedge fund] with stolen customer money. And all of this dirty money was used in service of Bankman-Fried’s desire to buy bipartisan influence and impact the direction of public policy in Washington.”

But there’s no mention in the indictment about Ukraine or U.S. aid to Ukraine, and there were no charges related to money laundering involving Ukraine.

FTX US. Voluntary Petition for Non-Individuals Filing for Bankruptcy. U.S. Bankruptcy Court for the District of Delaware. 11 Nov 2022.