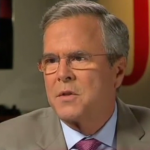 Republican Jeb Bush on “Fox News Sunday” made economic claims about poverty and growth from tax cuts that don’t measure up to the facts. 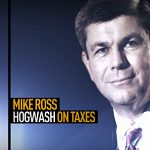 A Republican ad claims Mike Ross, the Democratic candidate for governor of Arkansas, voted “against taxpayers” more than 80 times while a member of the House. We find that number to be inflated.

A TV ad funded by two Democratic PACs falsely claims Linda McMahon’s “tax plan hurts middle-class families.” Actually, her tax plan would reduce the marginal income tax rates for middle-income families — married couples earning roughly between $70,700 and $142,700 — while keeping the current rates the same for everyone else.
The ad also distorts the facts when it says McMahon — a Republican candidate for the Senate from Connecticut — “threatened to eliminate” the Department of Education and to cut “early reading programs and college Pell Grants.”

President Obama has repeatedly and falsely claimed that “right now, we’re scheduled to spend nearly $1 trillion more” in tax cuts for the “wealthiest 2 percent of Americans.” That’s simply not true. The Bush tax cuts — which Obama and Congress extended for two years — expire at the end of this year, so any plans to “spend” beyond Dec. 31, 2012, would require Congress to act again.
The White House told us that the president is referring to the $968 billion that “we save”

Howard Dean falsely claimed that "60 percent of the deficit is due to the Bush tax cuts." Last year, the nonpartisan Congressional Budget Office said that allowing the tax cuts to expire at the end of 2010 would decrease the deficit from $1.3 trillion in 2010 to $1.07 trillion in 2011. That's a 17.7 percent drop. It's sizable. But it's not 60 percent.
Dean, the former Vermont governor and Democratic National Committee chairman, made his claim on CBS'

Sen. Jeff Sessions wrongly claimed that federal revenues "went up every single year" after the Bush tax cuts were "put in." Actually, federal revenues declined for three straight years after the first tax cut was signed in 2001.
The Alabama Republican made his statement on "Face the Nation."

Sessions, July 10: The revenue went up every single year after those tax cuts were put in. The revenue is down now because of the low economy.

In episode 40 of our podcast, we tell you about President Obama’s false assertion about Social Security, wrong claims about the Bush tax cuts from both parties and yet another Internet rumor about the health care law.

Almost all of the misinformation coming from politicians on the Sunday shows this week had to do with the expiring Bush tax cuts, which Congress is expected to vote on this week. Coming in second was the military’s "don’t ask, don’t tell" policy for gay servicemembers — we’ll post Tuesday on an exchange that took place on that topic on ABC’s "This Week."
Polling Problems
On CBS’ “Face the Nation,” Republican Sen. Jon Kyl of Arizona gave a misleading description of public opinion on the Bush tax cuts.

In episode 39 of our podcast, we look at misleading statements about the pay of federal workers versus private sector workers. Plus, we debunk a talking point about the Bush tax cuts and tell you the story of an old (and now reincarnated) chain e-mail about Jane Fonda.

Senate Minority Leader Mitch McConnell misrepresented public opinion about the Bush tax cuts, which are due to expire at the end of the year. In his weekly remarks Nov. 20, he made this unequivocal statement:

McConnell, Nov. 20: Americans don’t think we should be raising taxes on anybody, especially in the middle of a recession.

But American opinion on the Bush tax cuts is not as clear as McConnell portrays it. Of five recent polls, only one shows a majority favored extending the tax cut for all Americans.