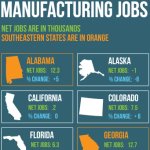 In touting conservative policies in Republican-controlled states, Jeb Bush claimed, “The Southeast is leading a renaissance in American manufacturing.” Not so. The Midwest has experienced a 9 percent increase in manufacturing jobs since the sector began its recovery in February 2010.

President Obama put a rosy spin on several accomplishments of his administration in his 2013 State of the Union address. The president claimed that “both parties have worked together to reduce the deficit by more than $2.5 trillion.” But that’s only an estimate of deficit reduction through fiscal year 2022, and it would be lower …

Declaring “manufacturing is back,” Vice President Joe Biden gave a rosy — but not entirely accurate or complete — picture of U.S. manufacturing at a March 28 campaign stop in Iowa.

Biden overstated — by 1.1 million — the number of manufacturing jobs lost before President Obama took office. He said the U.S. lost 5.8 million manufacturing jobs “during the 2000s, before we came in.” But that figure includes 2009 — Obama’s first year in office.