Legal Immigration Down, Not Up 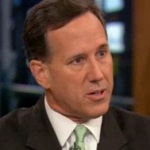 Rick Santorum said that the United States is “accepting more legal immigrants than we ever have.” Actually, the number of people being granted lawful permanent resident status has decreased consecutively for two fiscal years. 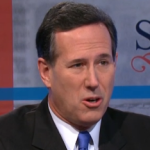 Rick Santorum blames President Barack Obama for “a nightmare of dependency with almost half of America receiving some sort of government assistance.” But the same could have been said of George W. Bush. In fact, the Census Bureau reported that in the third quarter of 2008, under Bush, “nearly half of U.S. residents live in households receiving government benefits.”
Back then, Census reported that 44.4 percent of Americans received some sort of government benefits. That has risen to 49 percent under Obama as of the most recent figures available,

Republicans claim the president’s $716 billion “cuts” to Medicare hurt the program’s finances. But the opposite is true. These cuts in the future growth of spending prolong the life of the Medicare trust fund, stretching the program’s finances out longer than they would last otherwise.
Mitt Romney has claimed that President Barack Obama has “robbed” Medicare. Rep. Paul Ryan, Romney’s running mate, said Obama “turned Medicare into a piggy bank to fund Obamacare,” promising to “stop the raid on Medicare.” And the Republican National Committee is promoting on its website a feature it calls “Obama’s Countdown to Medicare’s Bankruptcy,”

The Massachusetts health care law signed by then-Gov. Mitt Romney did not create a “government-run” system, as some critics have said. But Romney wrongly claims everyone under his law was covered by private insurance, ignoring his own expansion of Medicaid.
Read more in our Jan. 20 article, “South Carolina Smackdown.”

Mitt Romney has put the brakes on a TV ad attacking Rick Santorum — one that highlights the blistering defeat the former Pennsylvania senator suffered in his 2006 reelection bid — as Santorum spends time with his ailing daughter. But with Santorum’s people announcing plans to head back to the campaign trail, expect the ad running in Santorum’s home state to resume as well.
The ad reminds Pennsylvanians of the trouncing Santorum got in his last election in 2006.

Does Santorum Care About Unemployment?

A new ad from the pro-Mitt Romney super PAC Restore Our Future plays a game of gotcha politics. It grabs a comment from Rick Santorum — “I don’t care what the unemployment rate’s going to be” — out of context to frame an attack on the former senator’s record on economic issues.
In context, Santorum was making the point that the election was about something bigger — more “foundational” — than just the economy, that it was about less government intrusion into the private sector.