Kerry Spins His Record on Iraq 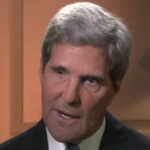 Secretary of State John Kerry says both he and Chuck Hagel, now the secretary of defense, “opposed the president’s decision to go into Iraq” as senators. But both voted to give President Bush the authority to use military force in Iraq.

Q: Do illegal immigrants cost $338.3 billion dollars a year? More than the Iraq war?
A: A chain e-mail that makes this claim is loaded with errors and misleading assertions. Published studies vary widely but put the cost to government at a small fraction of that total.

During the 2008 campaign, we repeatedly called out then-candidate Barack Obama for complaining that the U.S. was spending billions in Iraq while the Iraqi government sat on a projected $79 billion surplus. We said that Obama’s projection didn’t account for updates to the Iraqi budget. But things were slightly more complicated than we originally thought: On paper, Iraq’s budget showed a surplus of up to $57 billion, but the U.S. Government Accountability Office pointed out that the Iraqi government had shown little ability to spend all that it had budgeted.

We’ve criticized both Barack Obama and Joe Biden several times now for claiming that the U.S. is spending $10 billion a month to Iraq while that nation is sitting on a $79 billion surplus. We wrote that the $79 billion figure was out of date because Iraq had since passed a $22.3 billion supplemental spending bill. Our criticism was based on a report from the Government Accountability Office. But we misread the report. The figure that Obama and Biden use is probably still too high,

The right-leaning Vets for Freedom, in an effort to drum up support for a resolution heralding “the strategic success of the troop surge in Iraq,” released this ad Oct. 1 in California. The ad, which criticizes Sen. Barack Obama, represents a $2.2 million buy – the largest statewide airtime purchase by the organization to date:

But the ad is off on claims we’ve already addressed, and it’s misleading on a few new ones.
It claims that Obama “skipped 45 percent of Senate votes.”

Summary
Biden and Palin debated, and both mangled some facts.

Palin mistakenly claimed that troop levels in Iraq had returned to “pre-surge” levels. Levels are gradually coming down but current plans would have levels higher than pre-surge numbers through early next year, at least.
Palin repeated a false claim that Obama once voted in favor of higher taxes on “families” making as little as $42,000 a year. He did not. The budget bill in question called for an increase only on singles making that amount,

Palin got her numbers wrong on troop levels when she said that troops were now down to “pre-surge” levels. The surge was announced in January 2007, at which point there were 132,000 troops in Iraq according to the Brookings Institute Iraq Index. As of September 2008, that number was 146,000. President Bush recently announced that another 8,000 would be coming home by February of next year. But that would still be 6,000 more than when the surge began.