The DNC press office says Perez meant to say that Trump wants to nix an overtime “rule,” specifically one that would expand the number of people eligible for overtime pay. But that wouldn’t eliminate overtime pay for anyone currently eligible to receive it.

Viewers of NBC’s “Meet the Press” on Feb. 26 were left with the false impression from Perez that Trump wants to do away with federal overtime pay requirements altogether. And there is no evidence Trump wants to do that.

Perez, the newly elected head of the Democratic Party, criticized Trump’s record on several issues, claiming, for example, that Trump “made it harder for first-time homebuyers to buy a home” and “tried to make it harder for people to save for retirement.” Those claims too are about federal rules that hadn’t yet taken effect, as we’ll explain. But first, let’s look at Perez’s claim that “Trump wants to eliminate overtime pay for people.”

Although Perez did not elaborate on what he meant in the “Meet the Press” interview, the DNC press office says Perez was referring to the overtime rule proposed by President Barack Obama (while Perez was the labor secretary), and the possibility that Trump may squash it.

Perez was more careful with his wording in an interview on NPR on Feb. 28 when he said, “We implemented an overtime rule at the Department of Labor, and he’s seeking to roll that back.”

Current federal rules require that workers be paid overtime — one-and-a-half times the regular pay — for time worked over 40 hours in a week. However, the overtime law has a so-called “white collar exemption” for salaried employees who are paid $455 a week or more, or $23,660 per year, for jobs described as executive, administrative, professional, computer or outside sales.

The Obama administration sought to expand the income eligibility cutoff to about $47,500 a year. That would have made an additional 4.2 million salaried U.S. employees eligible for overtime pay, according to Labor Department estimates.

The DNC noted that Trump talked about “[r]olling back the overtime regulation” in an interview with the online news service Circa in August.

The DNC also noted that a memo from the Trump campaign’s Small Business Advisory Council again targeted overtime rules as an impediment to small businesses.

Trump campaign memo: Labor issues like minimum wage, overtime rules, and union organizing all take their toll. It seems to many Small Business Owners out here in “flyover land” that the insiders in DC have it in for them. And they probably do. They tell you what you have to pay, set your work rules, mandate benefits and make it impossible to get a fair organizational vote.

The rules finalized by the Obama administration in May 2016 — and set to begin in December 2016 — never went into effect. Twenty-one states sued the Labor Department claiming the rule was unconstitutional, and in November, a judge in the U.S. District Court for the Eastern District of Texas found the rule was unlawful and granted a nationwide preliminary injunction.

The Trump administration’s Justice Department submitted a filing with the 5th Circuit Court of Appeals on Jan. 25 asking for an extension until March 2 to file a reply brief in order to allow the incoming “leadership personnel adequate time to consider the issues,” the Washington Examiner reported.

“It is highly unlikely the administration will support the rule,” the paper said.

The Washington Examiner and the DNC both cited an op-ed written by Andrew Puzder, Trump’s initial choice to head the Labor Department, as an ominous sign for the proposed overtime pay expansion. In the op-ed, published in Forbes on May 18, 2016, Puzder, a fast-food executive, blasted the expansion of overtime pay proposed by the Obama administration.

“Turning highly sought-after entry level management careers into hourly jobs where employees punch a clock and are compensated for time spent rather than time well spent is hardly an improvement on the path from the working class to the middle class,” Puzder wrote.

Perez referenced that in the “Meet the Press” interview when he said Trump “nominate[d] someone to head the Labor Department who wants to gut overtime pay.”

But Puzder withdrew his nomination to be labor secretary on Feb. 15 when it became clear his confirmation in the Senate was in jeopardy.

On Feb. 16, Trump tapped R. Alexander Acosta, a law school dean and former assistant attorney general, as his new pick to head the Labor Department. We searched Nexis, a news database, but could find no record of Acosta weighing in on the issue of overtime pay or the Obama administration’s effort to expand eligibility.

The White House press office did not respond to our questions about the administration’s position on the overtime pay rule. It may be that the Trump administration seeks to squash it. But that’s still not the same as Trump attempting to “eliminate overtime pay for people” — at least not for people who are eligible for it today.

Perez also claimed that Trump “made it harder for first-time homebuyers to buy a home” and “tried to make it harder for people to save for retirement.”

Perez, Feb. 26: Hours into his presidency he made it harder for first-time homebuyers to buy a home. A few days later he tried to make it harder for people to save for retirement.

Again, in both of those claims — which he repeated on CNN’s “State of the Union” that same day — Perez is referring to Obama administration changes that hadn’t yet taken effect.

The FHA, which offers mortgage insurance to first-time homebuyers and those with lower credit scores, projected homeowners would save an average of $500 a year due to the reduced premiums.

But on Trump’s first day in office, the Trump administration announced the reduction, which had not yet happened, was “suspended indefinitely.” A memo from HUD stated that “more analysis and research are deemed necessary to assess future adjustments while also considering potential market conditions in an ever-changing global economy that could impact our efforts.”

MarketWatch reported that many housing experts expected the move, but at least one analyst, Compass Point, cautioned that “a delay does not necessarily signal a reversal” and indicated the odds of a full reversal were now 70 percent.

Trump hasn’t made it “harder” to buy a home because the rate cut did not take effect. First-time homebuyers “will be paying the same premium rate for required mortgage insurance that you would have since January 2015,” as the Chicago Tribune wrote. It’s true Trump has not made it easier, which is what the Obama administration’s change would have done, but we still don’t know what exactly Trump will do.

As for retirement savings, Perez was referring to Trump’s move to delay and review what is known as the “fiduciary rule,” which was designed to prohibit retirement advisers from accepting incentives — like cash or vacations — to promote certain funds.

The rule, unveiled by the Obama administration last April, was set to go into effect in April.

On Feb. 3, the Consumer Federation of America issued a statement warning that Trump’s executive order to halt the fiduciary rule “threatens to strip working families and retirees of protections they desperately need when they turn to financial advisors for help with their retirement savings.” If the Trump administration repeals the rule, CFA said, “brokers and insurance agents will be free to go back to putting their own financial interests ahead of the interests of their clients, recommending investments that are profitable for the firm but not the customer. And they will be permitted to do all this while claiming to act as trusted advisers.”

“They thought they were trying to protect investors in their retirement accounts. But by ‘protecting investors,’ they highly limited their choices,” Cohn said on CNBC on Feb. 3. “I  don’t think you protect investors by limiting choices.”

“When you’re trying to encourage younger and younger people to invest for a longer period of time, you need to give them the proper choices that will allow them to accumulate wealth for a long period of time,” Cohn said.
His comments were echoed by the U.S. Chamber of Commerce, which filed a lawsuit in June challenging the rule, and claimed the rule was too far-reaching and would unfairly limit the options of investors.
We also can’t say at this point if Trump’s move to delay and review the fiduciary rule will “make it harder for people to save for retirement.” It remains to be seen what the Trump administration will do and what impact that decision will have on retirement savings.
Share the Facts
FactCheck.org 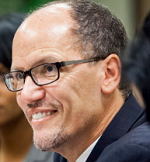