Boasting about a decline in apprehensions at the U.S.-Mexico border on his watch, President Donald Trump falsely claimed that border apprehensions “didn’t go down” under “past administrations.” Actually, they declined in 10 of the last 16 fiscal years.

Before Trump took office, southwest border apprehensions had dropped 75 percent from the peak of 1.64 million in fiscal year 2000 to about 409,000 in the most recent fiscal year that ended Sept. 30, 2016, according to U.S. Customs and Border Protection data.

Trump made his remarks during a speech in New York.

The president is referring to people caught trying to illegally cross the southwest border. He frequently says that apprehensions at the U.S.-Mexico border have declined by 78 percent. At a rally in Youngstown, Ohio, on July 25, the president said: “Since I took office, we have cut illegal immigration on our southern border by record numbers, 78 percent.”

Apprehensions at the southwest border indeed have declined since Trump took office in January. It’s not quite a 78 percent reduction, but it is still substantial.

We don’t know how the president arrived at 78 percent. We repeatedly asked the White House for the president’s source, but we received no response.

It’s possible that Trump is referring to a Washington Times article that said southwest border apprehensions were down 76 percent since Trump’s election. The May 9 article cited figures from U.S. Customs and Border Protection that showed a drop from 47,210 apprehensions for the month of November 2016 to 11,126 for the month of April.

But the preferred method of measuring the percentage change is by comparing the same time periods — such as June 2016 to June 2017 or fiscal year 2016 to fiscal year 2017 — to account for seasonal fluctuations. For example, Customs and Border Protection noted that there was an expected “seasonal uptick” in southwest border apprehensions in May compared with April, but that there still was a significant decline when comparing May 2017 to May 2016.

By comparing the same time periods, we found that southwest border apprehensions were down 53 percent from June 2016 to June 2017, and they were down 58 percent when comparing the first full five months under Trump in 2017, from February to June, with the same five-month period in 2016.

As we said, the decline is substantial even if it is not 78 percent.

However, Trump was wrong when he said that “under past administrations, the border didn’t go down, it went up.”

Since peaking in fiscal year 2000, apprehensions have declined in 10 of the last 16 fiscal years for a total decline of 75 percent, as the chart below shows. In fiscal 2011, southwest border apprehensions declined by nearly 27 percent from the previous year to 327,577 — the lowest yearly total since 1972. 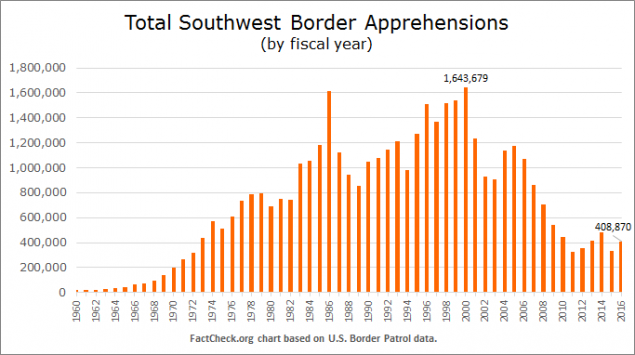 As we have written before, there are many factors that account for the ups and downs of illegal immigration along the southwest border, especially economic conditions.

Still, the president is right that there has been a decline in border apprehensions on his watch, regardless of the exact percentage, and his promise to crack down on illegal immigration may be a factor. Guadalupe Correa-Cabrera, an associate professor in the Department of Public Affairs and Security Studies at the University of Texas Rio Grande Valley, told the Los Angeles Times that immigrants are going to “think twice” because of the “perception that it’s going to be very difficult for immigrants to cross into the U.S. and stay in the U.S.”

But the president is wrong to say apprehensions have not gone down during other administrations.

False
Claimed that “under past administrations, the border [apprehensions] didn’t go down — it went up.”
Donald Trump
President of the United States