The minority party in the Senate — in this case, the Democrats — can block, or filibuster, legislation by taking advantage of a Senate rule that requires 60 votes to end debate on legislation before a final vote can be taken on the bill. That’s what caused the recent partial government shutdown.

On ABC’s “This Week,” Democratic Sen. Dick Durbin defended the parliamentary practice, claiming getting rid of the filibuster “would be the end of the Senate as it was originally devised and created going back to our Founding Fathers.” But the filibuster wasn’t part of the Senate rules when it was created.

The House and Senate in the first Congress in 1789 both had a rule that allowed a simple majority to end debate and call for a final vote, according to Sarah Binder, a professor of political science at George Washington University who wrote a book on the history of the filibuster. The rule was rarely invoked, and it was dropped by the Senate in 1806, allowing for unlimited debates. But filibusters didn’t become an issue until the mid-1800s, when the Senate “grew larger and more polarized along party lines,” Binder said in testimony before the Senate Committee on Rules and Administration in 2010.

“The most persistent myth is that the filibuster was part of the Founding Fathers’ constitutional vision for the Senate,” Binder told the Senate rules committee.

The filibuster issue arose this past weekend after Senate Majority Leader Mitch McConnell failed on Jan. 19 to get the 60 votes he needed on his motion to end debate on a temporary spending bill, resulting in a partial government shutdown at midnight. A day after the shutdown began, President Donald Trump urged the Republicans to change the rules and require a simple majority to move legislation — the so-called nuclear option.

Great to see how hard Republicans are fighting for our Military and Safety at the Border. The Dems just want illegal immigrants to pour into our nation unchecked. If stalemate continues, Republicans should go to 51% (Nuclear Option) and vote on real, long term budget, no C.R.’s!

This wasn’t the first time Trump called on Republicans to change the rules. He did so during the health care debate — so this issue may come up again, even though the shutdown ended on Jan. 22.

George Stephanopoulos, the host of ABC’s “This Week,” asked Durbin about the president’s call to end the filibuster.

Stephanopoulos, Jan. 21: What about that nuclear option, doing away with the filibuster?

Durbin: Well, I can tell you that would be the end of the Senate as it was originally devised and created going back to our Founding Fathers. We have to acknowledge our respect for the minority, and that is what the Senate tries to do in its composition and in its procedure.

Binder and her coauthor, Steven S. Smith, debunk that notion in their 1997 book “Politics or Principle? Filibustering in the United States Senate.” It’s true, as they write in their book, that the framers of the Constitution intended the Senate to be a more deliberative body and to serve as a check on the more populist House of Representatives.

Binder and Smith, “Politics or Principle?”: “The use of the Senate,” noted James Madison during the Constitutional Convention in 1787, “is to consist in its proceedings with more coolness, with more system, & with more wisdom, than the popular branch.”

But the Founding Fathers hoped to accomplish that by writing into the Constitution distinct differences between the two chambers. The Constitution requires senators to be older than House members (30 instead of 25) and subject to a longer citizenship requirement (nine years, instead of seven); establishes six-year, staggered terms for senators, instead of two-year terms for House members; and allows each state to have two senators, rather than having representation based on population.

The Founding Fathers did not, however, tell the Senate how it should conduct business. The Constitution gave each chamber the power to set its own rules in Article I, Section 5.

“The records of the convention and the arguments in the Federalist Papers give no indication that the framers either anticipated or desired procedural protection for Senate minorities,” Binder and Smith write in their book. “The vision of the Senate as a body of unrestrained debate and amendment simply cannot be attributed to the framers of the Constitution.”

In the Federalist Papers, which explain the Constitution in detail, James Madison and Alexander Hamilton both warned about the dangers of protecting legislative minorities. In Federalist No. 58, Madison wrote that requiring “more than a majority of a quorum for a decision” would reverse “the fundamental principle of free government” and transfer the power to the minority party. In Federalist No. 22, Hamilton wrote that giving “a pertinacious minority” the power to negate majority rule — “which is always the case where more than a majority is requisite to a decision” — would result in “tedious delays; continual negotiation and intrigue; [and] contemptible compromises of the public good.”

When the first Congress convened, the House and Senate had similar rules when it came to limiting debate.

In her 2010 Senate testimony, Binder said, “The House and Senate rulebooks in 1789 were nearly identical. Both rulebooks included what is known as the ‘previous question’ motion. The House kept their motion, and today it empowers a simple majority to cut off debate. The Senate no longer has that rule on its books.”

What is the “previous question” motion, and why did the Senate drop it?

In a report on the history of limiting debate in the Senate, the nonpartisan Congressional Research Service said the “previous question” motion is a parliamentary procedure first introduced in the British Parliament in 1604 as a means of “limiting debate.”

The rules adopted by the first U.S. Senate stated: “The previous question being moved and seconded, the question from the Chair shall be: ‘Shall the main question be now put?’ And if the nays prevail, the main question shall not then be put.” Translation: A final vote on the main bill, resolution or question before the Senate could not occur without a simple majority.

But, as Binder and Smith write in their book, the Senate got rid of the “previous question” motion in 1806 at the suggestion of then-Vice President Aaron Burr – who, under the Constitution, also served as president of the Senate.

In his memoirs, John Quincy Adams, the sixth president of the United States, writes that Burr “recommended the abolition of that respecting the previous question, which he said had in the four years been only once taken. … This was a proof that it could not be necessary, and all its purposes were certainly much better answered by the question of indefinite postponement.”

The rule change made filibusters possible, but it wasn’t until after the Civil War that filibusters became more common. “By the 1880s, almost every Congress began to experience at least one bout of obstructionism,” Binder told the Senate committee in her 2010 testimony.

Because of the growing use of filibusters, the Senate adopted a rule in 1917 to limit debate using a procedure known as the cloture motion. At that time, a cloture motion required the approval of two-thirds of the senators present in order to cut off debate on legislation and move to a final vote. The rule was expanded in 1949 to include presidential nominees, and it was changed again in 1975 to require three-fifths, or 60 votes, to pass, according to the nonpartisan Congressional Research Service.

A cloture motion was filed by McConnell, the Senate majority leader, in an attempt to cut off debate on the spending bill. But it received only 50 votes, and the government partially shut down for three days.

It is certainly accurate to say that there is a long history in the Senate of allowing filibusters. But Durbin went too far when he said getting rid of the filibuster “would be the end of the Senate as it was originally devised and created going back to our Founding Fathers.”

Spins the Facts
Getting rid of the filibuster “would be the end of the Senate as it was originally devised and created going back to our Founding Fathers.”
Dick Durbin
U.S. Senator
https://www.durbin.senate.gov/ 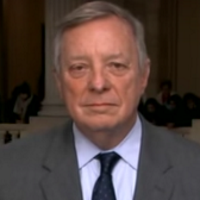